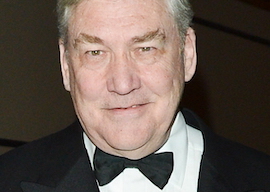 Goody, goody gumdrops! The Donald has pardoned Lord Black and I couldn’t be happier. Conrad got a bum deal and spent three and a half years behind bars for charges I always believed to be phony, most of which were overturned. Never mind. One cannot get back the years wasted in a cell for as good a mind as Conrad’s, but one does emerge stronger from the pokey. (Throwing writer David Irving in jail in Austria was also a sham, using a law designed to harass political opponents.) The newspaper most used to wrap gefilte fish in, the Big Bagel Times, reported the Black pardon in a manner that can only be described as constipated. Black is a conservative, a red flag to envious lefties, but there’s also something else involved. I have spoken to medical experts about the envy shown by lefty hacks, and I have been told that it is not only ideological but also physical. British hacks and their American counterparts, I have been assured, enjoy a bowel movement only two to three times per month. They are not only full of you-know-what, it also clouds their mind and makes them envious of their betters. This leads to writing and reporting whoppers and so on. When I last spoke to Dr. Klinghoffer in Zurich, a specialist in constipation and other forms of brain diseases, he insisted that lefty hacks are easily cured of their brain problems by daily colonoscopies.

But let’s get back to Lord and Lady Black. The closest I got to being fired from The Spectator these 42 years was at the turn of this century over an article that Conrad memorably labeled “Taki Worse Than Goebbels.” I kept the headline of a Standard street ad and had it framed, and when Conrad came to my New York house for dinner while waiting to go to prison, there it was, on my mantelpiece, and he gave a wry smile. It was not done on purpose to remind Conrad; I keep it there so that people will see it and get angry.

The gefilte fish wrapper cattily reported that the surprise party that Conrad threw for Babs’ 60th at La Grenouille in the Bagel—which cost $62,000 and was charged to his company, the present Telegraph-Spectator—was claimed as a business expense, and that The Donald was the reason. I happened to be at that party, and as with most things in America, it was business despite the fact Taki was present. Actually, Conrad was trying to set up a deal with the future 45th president of you-know-what, and had gone as far as to place yours truly next to Melania at dinner. All the big shots were there and I remember it well. Too well, alas.

“I saw a large orange vision approaching me. It was The Donald, and he was smiling broadly.”

While the future first lady and I discussed that ghastly social climber Richard Holbrooke, whose biography was beautifully reviewed by Sam Leith in The Spectator two weeks ago, Melania wanted to know what Holbrooke’s real name was. All I could tell her was that Holbrooke was a name the con man had pulled out of a hat, but what I did know was that he and the Americans, not for the first time, had established a Muslim belt in the middle of the Christian Balkans. That is when a gefilte fish wrapper columnist sitting across from Melania and me began to interrupt. Neither she nor I liked that, and it finished badly. I told him that he would be sucking on his gums for the next couple of months if he interrupted us again, and he shut up.

After Conrad gave a gracious speech praising his wife and calling out Donald Trump (as well as yours truly), I saw a large orange vision approaching me. It was The Donald, and he was smiling broadly. It was obvious that Melania had told him of my threat to punch the lights out of the condescending elite interrupter. “You’re the greatest,” he told me, and I have never seen or heard from him since.

And speaking of Holbrooke, I remember when he ran off with TV newscaster Peter Jennings’ wife, Kati Marton, a sexpot I knew because of our children going to the same kindergarten school in the Bagel. Peter was a very nice man—a lefty, to be sure, but he didn’t deserve to be cuckolded by Holbrooke. The last time I saw her was during the premiere of the greatest movie ever made, Seduced and Abandoned, starring, in a two-minute appearance, yours truly. (The great Debbie Ross wrote that I was a Greek Gielgud—not in my sex habits, Debbie.) Kati Marton is a good writer and as previously stated a sexpot and attractive and very smart, but she must have had a brain aneurism the day she married the pushiest man on earth.

Never mind! It’s now all over where Holbrooke is concerned; he croaked, and Conrad is pardoned, and although I’m not feeling hunky-dory—my last week of partying set me back a bit—I’m off to my son-in-law and daughter’s schloss deep in the Austrian countryside for my grandson’s christening and three days and nights of making whoopee. Yippee!