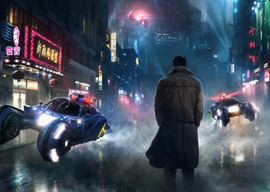 Blade Runner 2049 is a remarkably faithful sequel/tribute to the old noir science-fiction cult film. Although set in Los Angeles’ snowy summer of 2049, thirty years after the first movie’s rainy autumn of 2019, it audaciously replicates most of the crowd-displeasing traits of that famous box office flop.

Denis Villeneuve, the French-Canadian director of Sicario and Arrival, is a competent successor to Sir Ridley Scott. If you loved the original Blade Runner, you’ll likely like the new one.

Much as the old one, the new Blade Runner 2049 is a slow-moving, visually magnificent but also oppressive, highbrow, vaguely Christological ambiguous allegory featuring a star in his prime (Harrison Ford then, Ryan Gosling now) giving a flat performance.

To be honest, though, not that many people actually enjoyed Blade Runner in 1982. For instance, embarrassingly, I didn’t. Yet, as I was watching the impressive new film slowly wear out its welcome, I was reminded once again that the first Blade Runner was perhaps more interesting to argue about than to see.

“The replicants, the ultimate in the deracinated and disposable, want to be part of a lineage, to have children and ancestors, to be a people.”

Granted, Blade Runner turned out in the long run to be enormously influential. For example, it launched Hollywood’s continuing Philip K. Dick craze (Total Recall, Minority Report, The Man in the High Castle).

It introduced retro looks to science fiction. One of Blade Runner’s breakthroughs was that people in the future wouldn’t wear silver suits with diagonal zippers, but instead would mine classic styles of the past.

As the advanced synthetic replicant Rachael, Sean Young dressed like Joan Crawford in Mildred Pierce, with the shoulder pads of a Baltimore Colt.

Of course, science-fiction movies almost always reflect not the far future but merely the cutting-edge styles of their own time. Nothing looks more dated than an old sci-fi movie because nobody chases trends harder.

Thus by the mid-1980s, a few years after Blade Runner, every woman in American was wearing enormous shoulder pads like a 1940s leading lady.

As the Chandler-esque detective Deckard, Ford sported a trench coat like Philip Marlowe in The Big Sleep. Perhaps because the weather in L.A. is too dry and warm to make the trench coats traditionally worn by movie private eyes practical, Scott decreed that smog had changed the climate.

I smelled Los Angeles before I got to it…. But the colored lights fooled you. The lights were wonderful. There ought to be a monument to the man who invented neon lights…. There’s a boy who really made something out of nothing.

Blade Runner was also one of the first (and last) sci-fi movies to feature demographic change. Los Angeles in 2019 was overwhelmed by Asian immigrants and everybody had moved back downtown into giant high-rises, two forecasts that seem right on track with two years to go.

While the mass immigration and the no-backyards crowding are arriving on schedule, Blade Runner’s flying cars and off-world space colonies, however, are lagging.

To this day, most other sci-fi movies foresee a future America that’s majority white with African-Americans as the main minority. Idiocracy is just about the only successor to Blade Runner in suggesting that America’s dystopian future will be even less white than its present.