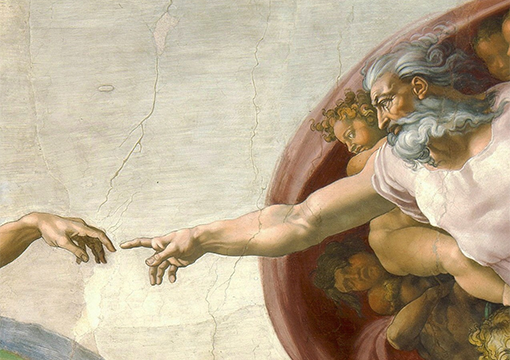 At a time when it can safely be said that no one on Earth is certain exactly what is happening with this whole coronavirus shebang, it’s dispiriting to see so many people proclaim without a wisp of doubt that they know why it’s happening.

If the coronavirus pandemic has taught us anything, it’s that humans will never waste an opportunity to be jackasses.

As I discussed last week, some will display this tendency by coughing on others. This week I’ll show how people are acting like jackasses by blaming God for the virus.

OK, if you want to split the scraggly beard hairs of the Hebrew elders, they’re technically blaming humankind for its alleged sinfulness, but they act like God’s hands are tied behind his back and he has no other choice but to start murdering his children in the hundreds of thousands.

Mind you, he murders everyone eventually, anyway—which seems a smidge hypocritical for someone who says “Thou shalt not kill”—but rarely does he do it on such a large scale and in such a comprehensively terrifying fashion.

Whether or not you believe in a deity, it’s hard to argue that life is not often brutally unfair and tragic. But at a time where almost everyone on the planet is befuddled and scared and while people are dropping like flies, to insinuate in any way that we all “deserve” this will rank you as a first-class jackass in the Book of Jim.

To hear some people tell it, God—a presumably perfect being who should never get upset, seeing as how he runs the entire casino and built it from scratch with his own hands—created a race of humans who are constantly disappointing him and making him angry.

“If the coronavirus pandemic has taught us anything, it’s that humans will never waste an opportunity to be jackasses.”

And just like anyone else with anger-management and impulse-control problems, this God eventually loses his cool and lashes out with the intent to harm.

It can’t possibly be that the people who cling to this narrative are simply using the idea of God to deflect away from the notion that they might be just a tad weird and sadistic.

In 2020, American thought leaders such as Hulk Hogan and Kourtney Kardashian are blaming God for coronavirus. Hogan—who, to his credit brought down the Gawker empire because they leaked a sex tape of the noble man of Christ banging a friend’s wife—took to Instagram to proclaim before the masses that the coronavirus buck stops at the desk of the Man in Charge:

Also on Instagram, noted public intellectual and role model for chastity Kourtney Kardashian—whose family became famous because their patriarch successfully defended the black murderer of a white woman—cited passages from 2 Chronicles 7 about god sending “an epidemic on my people” and told her bazillions of brain-dead acolytes to “Pay Attention Children”:

Whenever I hold back the rain or send locusts to eat up the crops or send an epidemic on my people, if they pray to me and repent and turn away from the evil they have been doing, then I will hear them in heaven, forgive their sins, and make their land prosperous again.

The question occurs to me, and I welcome anyone’s attempt to answer it: What’s so “free” about “free will” if by merely exercising it you are punished with droughts and locusts and epidemics? I’ve never been able to square that circle, so help a brother out here.

In an article called “Corona Virus – Is God unhappy with Mankind?” a certain A. O. Siddiqui conjures yet another riddle I’ve never been able to wrap my fallen, post-Edenic brain around:

The Holy Scriptures from the Old Testament, Bible to Quran, have verses warning about the punishment of God. History tells us of the storm of Noah that drowned His earlier creation. But those who firmly believe in God also believe that God is most kind.

OK, yet again, I’m having trouble fitting the peg in the hole here, specifically reconciling the mass drownings with the idea of “most kind.” I’m also spinning around in circles like Curly Howard with one foot nailed to the floor about the idea of an unhappy God. I mean, talk about being hard to please—he’s GOD, for God’s sake! What else could he want? Again, in these days of tribulation, of wailing and gnashing of teeth and cops dragging people off city buses because they’re not wearing masks, I beseech ye brethren and sistren to help me understand this.

Jew-baiting Christian preacher Rick Wiles claims, apparently purely on faith because I didn’t see him cite any evidence, that God has infected synagogues with coronavirus:

Can ya get a load of that?

Zimbabwe’s defense minister, a toad-like woman named Oppah Muchinguri, claims that God sent COVID-19 to ravage the USA due to its economic sanctions against the otherwise prosperous nation of, you know, Zimbabwe:

God is punishing them now and they are staying indoors now while their economy is screaming like what they did to ours by imposing sanctions on us….Trump should know that he is not God. They must face the consequences of coronavirus so that they also feel the pain.

I’m seeing a pattern here—these people worship a God who set up a universe that allows him to constantly indulge his desire to inflict pain on his creations. Not passing judgment, mind you—just noticing.

Tennessee televangelist Perry Stone claims that God is spraying this virus worldwide to punish humanity for allowing gay marriage and abortion. Pastor Steven Andrew of the USA Christian Church—who looks gayer than a Judy Garland album spinning on Bette Midler’s turntable—says that God is raining coronavirus down upon humanity “because the Bible teaches homosexuals lose their souls.”

Orthodox Israeli Rabbi Meir Mazuz says God is wreaking vengeance because of gay pride parades, which he describes as “a parade against nature, and when someone goes against nature, the one who created nature takes revenge on him.”

In March, Israeli Health Minister Yaakov Litzman described the pandemic as “a divine punishment against homosexuality.”

Litzman was recently diagnosed with COVID-19.

As they say, God works in mysterious ways.