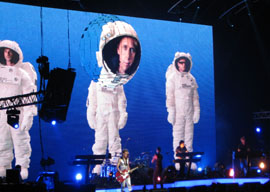 Did you have that stupid idea in high school too?

That on prom night or graduation, you and your two or three hippie or punk or goth friends (the only ones you had) would go, all right, but wear tuxedos (if you were girls) or drag (if you were guys) and maybe somehow sneak on some real music, right, or even pull off some Carrie-like prank (except you were the school’s “Carries”…)”oh, man, you”d show them…

Except you all sat out the evening in somebody’s rec room instead, smoking menthols, drinking lemon gin, singing along to the Rocky Horror soundtrack, and watching all the Malcolm McDowell movies you could rent, because those losers weren”t worth it anyhow.

Well, I think that was Richard Spencer’s plan for CPAC, except he made the mistake of actually showing up.

Not that I understand why anyone would want to go to CPAC, but what Spencer expected to accomplish is even more mysterious. If his goal was to get conspicuously kicked out, he succeeded”but that’s a pretty puny aspiration, on par with muling itching powder into the balloon-festooned gym. Like me and my friends, Spencer should have stayed home.

Because whatever your opinion of his opinions (and no one who’s witnessed more than twelve minutes of The Jerry Springer Show can swallow “white supremacy” whole), the undeniable persuasive power Spencer has acquired toiling online all these years is drastically depleted every time he goes out in public, like the half-life of boron-16.

“Maybe Spencer just had Depeche Mode on the brain”a condition I haven”t experienced since around 1988.”

In one short stretch, Spencer has been sucker punched (not a great look); sucker punched himself at his own conference, declaiming, “Hail Trump, hail our people, hail victory” with all the quavering conviction of a one-line extra from They Saved Hitler’s Brain. (Pro tip: As a vehicle for conveying sincerity, volume alone is a rickshaw at best); and now this multilevel mortification:

Spencer was ostensibly expelled from CPAC last week for heading a “left-wing fascist group”; he “asked if he could stay if he would simply “stay out of trouble””; and then said something even weirder:

One reporter “asked if he liked rock music,” and Spencer replied cryptically, “Depeche Mode are the official band of the alt-right.”

As a snotty mic-drop response to an irritating journalist, that comment isn”t just unwarranted under the circumstances, it doesn”t work, the way a patently absurd pick like the Partridge Family or the Grateful Dead would have.

And it lacked the knowing trolling potency of Trump’s “Sweden” streamer fly. If only Spencer had namechecked Eric “Enoch was right” Clapton or, orders of magnitude better, David “yes, I believe very strongly in fascism“ Bowie, thereby dispatching droves of Bowie’s postmortem millennial fans to lose their ideological innocence in the archives of The Guardian or Rock’s Backpages.

Someone just smart enough to be stupid might have chosen Sham 69, the Cockney Rejects, or even Siouxsie and the Banshees.

Someone stupid enough to be smart? Skrewdriver.

But Depeche Mode? The most serious of that batch of po-faced new-wave synth-based “haircut” combos who oozed up post-punk? Okay, “Master and Servant“ gives off a Night Porter vibe, but that just means they”re Englishmen, not Nazis.

There was nothing remotely fascist about Depeche Mode. I say this as an avid consumer of the U.K. music press during the band’s heyday, and an owner of their most popular album, although never exactly a fan”a species that, I was startled to see, still exists in sufficient numbers to get “Depeche Mode” and “Richard Spencer” briefly trending on Twitter after his remark went viral. (Although a hastily conceived hashtag, #AltRightAn80sSong, yielded predictably disappointing results.)

Along with the band itself, its fans swiftly mocked and denounced Spencer. A clip from Matt and Trey’s ill-fated Orgazmo (1997) suddenly started making the rounds, one in which a mulleted, trashy weirdo says, “I don”t wanna sound like a queer or nothin”, but I think Depeche Mode is a sweet band.”

Now, Depeche Mode’s lead singer had recently”along with now-countless historically incontinent celebrities”compared Donald Trump to Hitler, and a few hours earlier, the group had unveiled early ticket access to their “Global Spirit” tour with some fanfare. So maybe Spencer just had Depeche Mode on the brain”a condition I haven”t experienced since around 1988.