Blight of the Living Dead 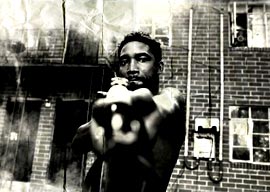 If you’re visiting Atlanta and aren’t looking to be shot in the face, swarmed by smack dealers, stopped by cops merely for being white, or set ablaze by an HIV-positive crackhead squatter, stay away from the area known as “The Bluff.” There are several more wholesome attractions only a few blocks southwest in downtown: At tourist traps such as the World of Coca-Cola, the CNN Studio, and the Georgia Aquarium, the thrills are more benign than being slit in the throat with a box-cutter.

“The Bluff” covers two Atlanta neighborhoods officially known as English Avenue and Vine City. Part of Vine City was designated in 2010 as America’s fifth-most-dangerous area. Some say The Bluff got its name because its narrow, hilly, one-way streets give it a fortress-like sense of isolation, but locals now boast that BLUFF means Better Leave U Fucking Fool. It is bounded on the east by Northside Drive and on its three other sides by roads named after black Georgia civil-rights leaders: Donald Lee Hollowell Parkway, Joseph E. Lowery Boulevard, and Martin Luther King Jr. Drive. It is therefore a testament to the, er, accomplishments of black Georgia civil-rights leaders.

“The Bluff is less a testament than it is a tombstone. It’s like driving through a cemetery of what used to be houses.”

I was going to say it’s a “living” testament, but this creepy little hood throbs with a feeling of death instead. In other apocalyptic urban landscapes I’ve crossed—places such as the South Bronx in the mid-80s and Gary, Indiana in the mid-90s—what makes your neck hairs stand on end is the terrifyingly still silence. You get the sense that a neighborhood has been bulldozed, that a once-bustling area has been razed with Dresden-level finality. The Bluff is less a testament than it is a tombstone. It’s like driving through a cemetery of what used to be houses.

Although more than half of these dwellings are abandoned, around 4,000 diehards still call The Bluff home. The area’s youth speak in a nearly indecipherable Southern-black patois and do fun things such as upload YouTube videos of their friends stumbling around half-retarded on heroin.

Apart from the world-famous open-air drug market and rampant prostitution, the only discernible entrepreneurial activity in The Bluff consists of a tiny independent film industry—Bluffywood?—serving up socioeconomic porn with footage straight from this rancid human zoo’s crumbled streets. A zero-budget 2006 fictionalized film called The Bluff purports to document “an underground that sucks our young and survival is only and [sic] option when you are dead.” The makers of 2011’s Snow on Tha Bluff won’t reveal which parts of their film are real and which are fiction, mainly because their lawyers have advised them not to. At the movie’s Atlanta Film Fest screening, a fight erupted between film makers and audience members when the latter questioned whether a scene depicting a baby playing near a table piled high with crack cocaine was real. A white film critic described the ensuing melee as “exciting.”