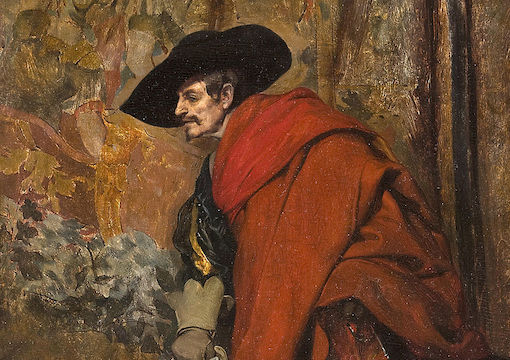 Polonius behind the curtain, Jehan-Georges Vibert

Polonius: Do you know me, my lord?

Hamlet: Excellent well; you are a fishmonger.

When Hamlet, playing the lunatic, calls the king’s chief counselor, Polonius, a fishmonger, he knows that Polonius will think him not only mad but insulting. So important and consequent a man a mere fishmonger, indeed! Hamlet then goes on to say, in the face of Polonius’ denial, that he wished he were so honest a man as a fishmonger, for to be honest is to be one man in himself a thousand.

My fishmonger is a minor hero of mine, though there are no heroics about him. One morning every week he comes to our town with his counter of fresh fish in his van; without him, we should have no fresh fish. He has been doing it for 35 years. He has a coterie of people in the town who depend upon him for one of their pleasures in life.

He is large and jolly and obviously enjoys his work, as well as being himself a bon vivant. I once overheard him tell a customer that he would never be rich doing what he did—selling fish in small towns like ours—but he was content to make a living. Glory be to those who have no overweening ambition! No doubt we need people of exceptional qualities, brilliance and drive, but we also need (just as much, and more of them) people who have no dreams of fame or wealth but are content to lead lives of quiet usefulness.

“If we know about something that ought not to be, we feel it is unethical simply to ignore it, so we find a way not to know about it.”

Not that the fishmonger’s life is an easy one, far from it. To reach our town he must drive at least two hours, and he sets up his stall in the market by 8:30 in the morning. He is up two hours before he sets out for our town to fetch his fish from the fish market, that is to say 4:30 in the morning at the latest. While in my medical career I was frequently called in the middle of the night, I cannot say that four in the morning ever became my favorite hour, and I never greeted the rosy-fingered dawn with enthusiasm.

At a dinner party recently, whose guests were largely doctors and professors, one of them (a most brilliant person, successful at everything she undertook) said that one of the things that the pandemic taught us was how dependent we were on people of humble occupation who for the first time became visible to us, whereas previously we had always taken them for granted, like the familiar furniture in our houses. They, as much as any doctors or scientists, were the heroes of the hour.

If what she said was true, the pandemic revealed what should always have been perfectly obvious. When Henry Mayhew published his London Labour and the London Poor in 1851, the writer William Makepeace Thackeray said that it revealed to him (and all like him) what should have been, and was, visible from stepping out of the front door, but which he (and they) had chosen not to see because it was inconvenient to see it.

Our ability to screen out, as it were, what we find uncomfortable to see is very considerable. More than forty years ago I stayed with a general in the Indian army in his house in a comfortable part of Delhi. Opposite his house was quite a large piece of land not yet built upon—almost inconceivable now—upon which there were some Mughul ruins. As soon as I arrived, having just flown more than 4,000 miles, I wanted to look at the ruins, which the general had never examined despite living opposite them. Rather reluctantly he came with, and on the way I noticed some very low habitations in the distance made of the detritus of a still very poor society. There were small people moving around the habitations and, pointing to them, I asked the general who they were. He was a tall man and looked over at the habitations.

“I see no one,” he said with a finality that more or less expunged those people from the face of the earth.

One of the reasons we so readily exclude from our vision what is there to be seen before our very eyes is that (a) it is disturbing to our peace of mind, and (b) we know that we are impotent to do anything about it. If we know about something that ought not to be, we feel it is unethical simply to ignore it, so we find a way not to know about it. This mechanism is neither fully conscious nor fully unconscious; we have a slight nagging awareness of our own bad faith all the time.

The wish to avoid evident but uncomfortable truths, and to allow people to maintain their blindness to them, makes it difficult for politicians to speak about the real problems that confront their respective societies. One might almost define truth in these circumstances as that which people wish to evade or do not want to hear about. The wish to preserve a treasured worldview is another reason for blindness to the obvious: We prefer our worldview to the world. Such willful blindness is not confined to one political tendency; it is common to all. It is a human trait.

In the modern world—perhaps in all worlds that have ever existed—blindness becomes institutionalized. The very existence of jobs may depend on not recognizing complex verities. Vested interests are, of course, visible in proportion to the square of the distance from the person perceiving them. Everyone thinks that the pursuit of his own vested interests is simply a manifestation of his own desire to do good in the world.

High levels of education are perfectly compatible with, if not actually conducive to, certain kinds of blindness. The educated are often snobs who look down on the uneducated not because of their actual behavior, which like anyone else’s behavior may be good or bad, but ex officio, simply because they are uneducated and do not discuss things in the abstract. Hamlet therefore knows that Polonius will be outraged at being mistaken for a fishmonger; but Hamlet also knows that a fishmonger is more likely to be an honest man than a courtier, if for no other reason than that his livelihood is not likely to survive dishonesty, whereas it is actually a requirement of the courtier that, metaphorically, so many of us have become.