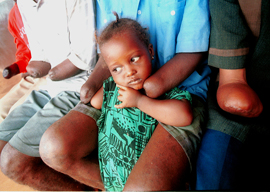 Victims of the RUF

Former Liberian President Charles Taylor has become the first African head of state to be convicted of a crime by an international court and the first national leader anywhere since Admiral Karl DÃ¶nitz at Nuremburg. Presiding Judge Richard Lussick, reading a unanimous finding, found Taylor “criminally responsible” for aiding and abetting the perpetrators and therefore “guilty of 11 charges including terror, murder, rape and conscripting child soldiers.”

Taylor’s conviction is due to his support for Foday Sankoh‘s rebels of the RUF (Revolutionary United Front) in neighboring Sierra Leone, who murdered tens of thousands and displaced, mutilated, raped, and robbed hundreds of thousands between 1991 and 2002. Sankoh’s mob will be long remembered for their practice of lopping off limbs. Victims were often asked if they wanted “short sleeves” (arms off) or “long sleeves” (hands off) before being chopped.

The tribunal has concluded this “revolutionary” force was heavily dependent on President Taylor for military, logistical, and political support which was generously supplied in return for diamonds. One of these diamonds was presented to supermodel Naomi Campbell following a dinner in 1997 with President Nelson Mandela in South Africa.

“The real tragedy is that much of this bloodshed need not have happened.”

Al Venter (author of Gunship Ace, which covers the Sierra Leone Civil War) says he recalls seeing two pregnant women having their bellies butchered, their fetuses removed and boiled before they were forced to eat the remains. Rather than use rope the RUF would string human entrails across roads at roadblocks.

My friend Bob MacKenzie, a former Rhodesian SAS officer, was captured by the RUF after he had run to the aid of a comrade who turned out to be dead. A nun who survived says she watched the rebels hang MacKenzie from a tree and bayonet him for hours before strips were cut from his body and eaten. The rebel leader was then given the honor of consuming his liver.

The real tragedy is that much of this bloodshed need not have happened. In March 1995, with Sankoh at the height of his powers, less than 200 South African mercenaries operating under the direction of private military company Executive Outcomes arrived with little bang but plenty of balls and brawn. They smashed the RUF bully boys, sending them scuttling into the countryside. Suddenly confronted by real soldiers up for a fight, the RUF fled in confusion. The South Africans soon secured control of most of the diamond fields that were feuling the violence, and relative calm rapidly returned to the capital city of Freetown and much of Sierra Leone.