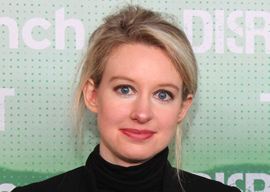 Once the reelected Obama administration gave the okay for the diversity industry to begin shaking down Silicon Valley like it does everybody else, we began to read over and over that the reason there are few female tech founders is because the white male power structure leaves billion-dollar bills lying on the sidewalk just to spite women.

And yet, the industry’s most memorable story of recent years, as recounted in Wall Street Journal reporter John Carreyrou’s page-turning new book Bad Blood: Secrets and Lies in a Silicon Valley Startup, is how young blonde Elizabeth Holmes became tech’s pioneering female self-made billionaire (on paper) despite not quite having gone through the formality of actually inventing her breakthrough medical gizmo.

Starting Theranos in 2003 as a 19-year-old Stanford dropout, Ms. Holmes specialized in charming elder statesmen with her vision of disrupting the blood-testing industry. Over the next dozen years, Ms. Holmes raised (and spent) about $900 million, and saw her half of the company’s stock valued at $4.5 billion. Carreyrou writes:

As much as she courted the attention, Elizabeth’s sudden fame wasn’t entirely her doing. Her emergence tapped into the public’s hunger to see a female entrepreneur break through in a technology world dominated by men…. In Elizabeth Holmes, the Valley had its first female billionaire tech founder.

Bad Blood will next be filmed by Will Ferrell’s pal Adam McKay (director of the Big Short mortgage movie) with Jennifer Lawrence as Holmes.

“The guys who won the Cold War were made fools of by a megalomaniacal young lady with the winds of the zeitgeist at her back.”

The movie star, though, has more va-va-voom than the CEO. The entrepreneur’s aged Bilderberger board members seemed less drawn by her sex appeal than by a sort of dynastic this-is-the-daughter-I-deserved-to-have-had emotion. (By the way, Carreyrou notes that her deep Voice of Command timbre is an affectation.)

It’s hard to reconcile today’s conventional wisdom that the sexes are enemy genders with how enthusiastically all these aged alpha males fell for Holmes’ self-positioning as the female Steve Jobs.

It’s almost as if there will never be a final victory in the battle of the sexes because there is too much fraternizing with the enemy.

Kissinger avuncularly tried to set Holmes up on dates with promising young fellows he knew, unaware that she was living with her “executive vice chairman” Sunny Balwani, a middle-aged businessman who had gotten lucky and rich in the 1990s Internet Bubble.

Under Holmes and Balwani, employees who pointed out problems were marginalized or fired, “while sycophants were promoted.” America’s H-1B visa system didn’t do anything for workplace honesty:

…Sunny had elevated a group of ingratiating Indians to key positions…. For the dozens of Indians Theranos employed, the fear of being fired was more than just the dread of losing a paycheck. Most were on H-1b visas and dependent on their continued employment at the company to remain in the country. With a despotic boss like Sunny holding their fates in his hands, it was akin to indentured servitude.

An employee complained on Glassdoor, the Yelp of job sites, that at Theranos, “Brown nosing or having a brown nose will get you far.” Bad Blood explains:

Sunny, in fact, had the master-servant mentality common among older generations of Indian businessmen. Employees were his minions.

Carreyrou rejects the theory that:

Balwani was Holmes’ Svengali and molded her—the innocent ingénue with big dreams—into the precocious young female startup founder that the Valley craved and that he was too old, too male, and too Indian to play himself.

The reporter instead sees Holmes as the more formidable personality than Balwani, whom he dismisses as “an erratic man-child of limited intellect.” Despite her lack of inventive ability, Bad Blood recounts, she is still “an amazing saleswoman.” That seems plausible, although Carreyrou leaves unanswered the question of what in the world Holmes saw in the untalented and unpleasant Balwani, other than his faith in her destiny.

Theranos’ business plan of fake-it-till-you-make-it is a venerable strategy in internet industries, but it’s not a good idea in health care. Fortunately, there is no evidence yet of anybody dying from Theranos’ dubious lab work. Still, because of the almost one million diagnoses Theranos has had to withdraw, Carreyrou notes that several patients were rushed to the emergency room in panic when Theranos’ inept devices reported they were dying, only to be sent home when their old-fashioned blood tests came back fine.

Carreyrou doesn’t do a particularly informative job of explaining why anybody ever thought Ms. Holmes’ sketchy idea for a product would conquer the world. (I would have enjoyed more analysis and speculation, but with Carreyrou getting $3 million for the movie rights, he can’t be blamed for sticking to a just-the-facts-ma’am approach that won’t open him up to a libel suit.)

So think about a typical annual checkup with your doctor. First, a nurse takes your blood pressure and some other vital signs. Then your doctor comes in and, among other matters, discusses your latest blood pressure with you.

It would be much better if blood testing were as quick and easy as blood-pressure testing. But blood sampling today happens in the reverse order. At your appointment your doctor gives you an authorization to get your blood drawn. You go to another office, and there a phlebotomist sticks a needle into a vein in your inner elbow or wrist and drains out a few vials of your blood. Then a few days later the results are finally ready.

However, you aren’t going to see your doctor for another year, so unless something threatening is evident, you generally don’t have much opportunity to review your latest results with him until your next appointment in twelve months.

It’s a hell of a way to run a railroad.