Bloodbath in the Rainbow Nation 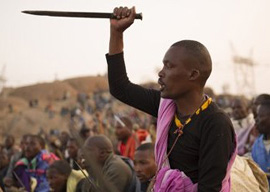 Police opened fire on a surging mob of angry mine workers on August 16th at South Africa’s Marikana platinum mine. When the guns went quiet, 34 were dead and at least 78 wounded. This came a few days after the killing of 10″including a pair of policemen who were hacked to death”bringing the total death toll to 44 and shock to the “Rainbow Nation.”

These deaths cast yet another pall of doubt over the ruling party’s ability to lead the people to the “promised land” that “liberation” was supposed to deliver.

It had started with a dispute between rival unions”the NUM (National Union of Mineworkers) and the feistier AMCU (Association of Mineworkers and Construction Union). Disputes over low pay led to abuse being heaped on the “greedy capitalists” who care naught for the worker. The press took a hit for allegedly publishing false figures on pay scales. The mine’s owner, a London-based company called Lonmin, said that wages were higher than those reported. Politicians had a stab at Lonmin executives as well as the unions. Then virtually all but the accused agreed there had been a massive failure of political leadership.

“There’s an embarrassing resemblance between Marikana and that infamous example of “racist” brutality, the Sharpeville Massacre.”

When unions, politicians, and mine bosses had caught their collective breath there was fury and pandemonium as the pointed fingers flew in every direction and the ANC scrambled for political cover.

Not to be left out of the fray, in came crashing the redoubtable Julius Malema, former leader of the ANC Youth League, with his shaved pate shining bright to lay the blame squarely at the feet of the man he once promised to die for, President Jacob Zuma.

But now we know everyone missed the mark badly. A dead rabbit was the real reason unrest turned to tragedy.

Eyewitness accounts reveal the protesters” pugnacity was not all the fault of the capitalists, unions, or politicians but the result of the intervention of a witch doctor known as Nzabe who had been summoned to minister to the miners.

They were cut several times on their upper body and a black substance was smeared on the wounds….After they got the muti people were so aggressive. They just wanted to fight. They felt so invincible.