Blue Valentine and the Decline of Men 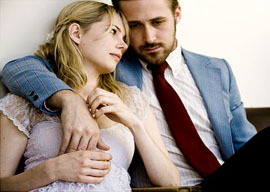 Blue Valentine, a superbly acted indie drama about a middle-class nurse falling out of love with her working-class house-painter husband, is both a timeless look at how sexual attraction actually works and an increasingly timely depiction of male-female troubles.

Since director Derek Cianfrance rewrote his screenplay 66 times while struggling to find financing over the last dozen years, Blue Valentine wound up more socially relevant now than it would have been in the 1990s. The dropout-rate gap between males and females has widened, technology has rendered a strong back irrelevant, and illegal immigration has further driven down the wages of less-educated men.

The press has celebrated the decline of men relative to women (for example, Hanna Rosin’s Atlantic article “The End of Men“). Yet are women notably happier? Mad Men creator Matthew Weiner explained why his series” JFK-era retrograde behavior excites contemporary female viewers: “What’s sexist in the office is fuel in the bedroom.” Blue Valentine is about a marriage running on fumes.

Michelle Williams is Cindy and Ryan Gosling is Dean. Each has been a minor star for some time, both earning Oscar nominations: he as a teacher in Half Nelson, she as the late Heath Ledger’s wife in Brokeback Mountain. (Williams and Ledger had a real-life child in 2005.)

Williams and Gosling, both 30, are excellent at playing a five-year-old girl’s worn-down parents as well as (in extensive flashbacks to their first meeting) beautiful 20-year-olds. Cianfrance shot the present on harsh digital video, the past on warm film stock.

“The dropout-rate gap between males and females has widened, technology has rendered a strong back irrelevant, and illegal immigration has further driven down the wages of less-educated men.”

Back then, she was a pre-med student with a taste for macho college wrestlers, while he was a furniture mover. In Blue Valentine‘s most charming scene, Dean moves an elderly man from his cluttered house into a nursing home. Surprisingly, he takes the time to carefully decorate the old coot’s new room for him with memorabilia from his WWII service and his days with his wife.

On the way out, he first runs into Cindy. She’s beautiful; he’s kind, ardent, musical, and he makes her laugh.

Six years later, their five-year-old daughter wakes Dean up in the living room, where he has evidently spent the night on the Barcalounger. Perhaps he passed out drunk, but the television is off, so it’s more likely he was banished from the marital bed.

By past generations” standards, Dean is a decent husband. He has a job, adores his wife, and never hits her. He is wonderfully creative at playing with their daughter. But like a lot of blue-collar smokers and drinkers, his looks are going fast”faster than hers. (You can tell how unhip Dean has become because he now wears the same kind of glasses I do.)