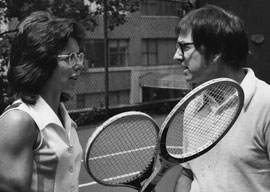 A man whose reputation rivals that of the Clintons” for dishonesty and lies recently claimed overhearing a conversation by a gangster confirming that Bobby Riggs had thrown his match against Billie Jean King in the infamous Battle of the Sexes on September 20, 1973. (King won 6-4, 6-3, 6-3.) According to the Clinton wannabe, Bobby was $100,000 in the hole to the Sopranos, and in order to extricate himself he told the hoods to bet on King, then threw the match thus saving his knees and possibly a cement coffin. It’s a good story that got the small-timer some publicity, but that’s all it is: a rumor that had made the rounds and one he tried to cash in on.

A friend of mine from San Antonio, Texas, Raymond Welder””Raimondo” to some of us Italian opera lovers”knew of my tennis background and asked me about it. Let’s take it from the top. In the winter of 1956 I was twenty years old and on the Caribbean tennis circuit. Sometime in January I ended up in Miami, where I was befriended by Bobby Riggs in the courts of the Racquet Club, a hustlers” paradise where good tennis players would spot points and games to not-so-good rich tennis players and gamble for large amounts. Bobby liked my game. I was a retriever who never missed, a sine qua non when playing lesser players for large stakes. Tennis is like backgammon”everyone who plays thinks they are better than they really are.

One of my first victims was a beautiful American Indian-Irish woman married to the great Hoagy Carmichael. She was a novice and I spotted her five games and 40-love each game for 100 dollars per set. One let cord or a double fault and it was over. I think I won something like ten sets in a row. I was set for life, plus I had fallen for her. Riggs then got me involved in other games, including gin rummy and poker. “You never bet unless you”ve got a lock” was his mantra. In other words, a lock was certain victory. I could understand that in tennis, where one knew what the opponent could or could not do, but in cards? Lady Luck does not always oblige. It soon became obvious that Riggs’s card games were rigged and outright cheating was going on (marked cards, peeks installed in the rooms next door, and so on).

I soon made my way up north, never to return to the fold. But during that winter I saw Bobby play tennis daily, and looking back there was no way a woman, no matter how much younger, could have beaten him. For starters, I saw Bobby play my friend Tony Vincent, a circuit veteran who had beaten the Wimbledon champion Lew Hoad the previous year in Monte Carlo. It was for a very small amount of money”no lock”but Bobby’s spins, slices, and touch came through. By 1956 he had been inactive for close to eight years and played only golf, an easy game to gamble on because of the handicapping. Riggs was scratch but played under a 14 handicap.