Body-Waxing at the United Nations 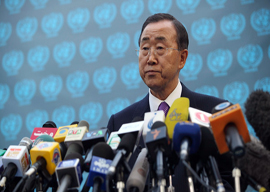 Remember the old clichÃ© about someone who is perpetually vacillating between a necktie and an open shirt? Or the one about the man who is noticeable for being completely unnoticeable? Step forward Ban Ki-moon, the useless UN’s useless Secretary General. Despite persistent allegations that he is a habitual body-waxer, I have always insisted that Moon does not wax because he’s Korean. No body hair. Then there were rumors that his book graced lonely onanists” bedside tables. Again, not true. Ban Ki-moon has never written a book. What he has done in the latest Libyan crisis is confirm something I”ve known all along: He and the UN are as much of a threat to the bad guys as a pastry shop.

Here was an opportunity for the UN to finally justify its bloated $30-billion annual budget by calling an emergency session of the Security Council, passing a resolution that freezes all Libyan assets, declaring a no-fly zone over Libyan airspace, and formally declaring the mad dog Gaddafi a human-rights criminal who will be persecuted to the end”and what did Ban Ki-moon do? In terrible English, he read aloud a lukewarm request for the deep-in-the-closet Gaddafi to stop killing people.”

“He and the UN are as much of a threat to the bad guys as a pastry shop.”

Three years or so ago, I was in a chic New York restaurant called La Grenouille with John and Jill Fairchild of Women’s Wear fame and Reinaldo and Carolina Herrera of fashion renown. Across the room was a New York socialite lady by the name of Deeda Blair with Ban Ki-moon. I”d had a drink or two and remembered that the Secretary General had invited Saudi Arabia’s head towelhead, Abdullah, to address the UN on matters ridiculous. (What could a towelhead who heads a ludicrous area which beheads raped women and unbelievers have to teach us?) So I wrote a short note to Moon expounding on my complaints and had the restaurant owner deliver it to him. After dinner, Moon’s party got up to leave and stopped by our table. Thank you velly much, said Moon. He bowed, as did his party. The owner then came over, smiling, and while handing me the bill, he said: “Your note to him was wonderful. There is only one problem. He was not Ban Ki-moon.

I know, I know, all Koreans look alike”to me, anyway”but the point is that even the Korean who was not the UN Secretary General would have done as good”bad”a job as this asshole, the real Ban Ki-moon. Why are our taxes paying for African and Middle Eastern freeloaders posing as diplomats and having a good time at our expense, but when the time comes for them to do something to help unarmed protesters in Libya, they spend their afternoons in tanning salons and penis-enhancing hospices? Why?