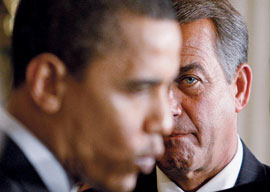 Once again, Republicans have snatched defeat from the jaws of victory. Faced with rising populist support of their principled stand against a law that a majority of the country does not like, the GOP has chosen this moment to sue for terms in the struggle.

Just days ago morale was high. Across the country citizens were outraged, not necessarily at the shutdown itself but the hackneyed way in which Obama was enforcing its conditions. Closed oceans, homeowners evicted from private property, and burkas over Mt. Rushmore. Given another week there might have been outright hostility toward the Commander-in-Chief.

Moreover, Republican propaganda seemed to be having a positive effect on those who otherwise disagreed with them. Even administration mouthpiece Andrea Mitchell was mute when confronted by a House member as to why, if Obamacare was so wonderful, Obama himself has yet to sign up.

“If Republican politicians want to be liked, they need to quit their jobs and work for charities. If they want to govern, they need to begin acting like men.”

Widespread outages of the application system, discontinuance of private plans, as well as reductions of employee hours and outright job firings were stoking the flames of a veritable mass desertion among Democratic rank and file. This was a war on its way to being won.

That is, until Thursday and the old Republican trait of cowardice under fire came to the fore when Boehner offered a six-week extension on the debt limit. What could account for this incredible strategic lapse? The same primary ingredients of every historical defeat: inferior armaments, weak character, and subpar intelligence.

Media Weapons. Republicans fear polls showing that the public blames them for the shutdown. Politicians worry this is predictive of mid-term electoral losses. Newsreaders laugh at their credulity. I’d join them if I weren’t about to weep.

For Republicans to be surprised that the Washington media accuses them of political intransigence is as if Ike had been surprised Germans returned fire on D-Day. Democrats control the media. The media will always implicate Republicans. The only way to overcome this imbalance is with demonstrable results. That can never happen when they give up the fight due to adverse publicity.

Without fail Republicans vow their resolve, reverse themselves after a few weeks of bad press, then relent. In the process, they lose not only whatever philosophical point they were trying to make but also the respect of voters. After all, if Republicans really weren’t at fault (just as the television claimed), why would they cave so easily? That’s John Q. Citizen’s reasoning for you.

The next time Republicans talk tough, they must follow through. If Republican politicians want to be liked, they need to quit their jobs and work for charities. If they want to govern, they need to begin acting like men. I can think of no significant statesman of the past who wasn’t hated during some part of his tenure.

Yes, there was a loss of roughly 1,000 since mid-September. To those 53% of Americans not individually invested in stocks, this is terrible. For those who actively or occasionally trade, this is the sound of a giant cash-register bell. Short-term volatility equals long-term gains. This shutdown is essentially a fire sale on good investments.