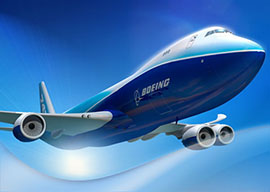 You can fly safely this Christmas knowing that hundreds of federal agencies and their private contractors are working around the clock to keep the hijackers and bombers out of your economy-class seats. Sit back, buy a double Scotch and soda, and watch the runway lights disappear below as you soar off to Christmas or Hanukkah bliss. Look around. Feeling smug? The bearded young man with the “Free Palestine” tote bag was not allowed to board. Men you”ve never met have been blown away by unpiloted flying bombs to keep them off your flight.

So you are safe, right?

Not since their new and faster jets disrupted Tony Curtis’s carefully balanced love life in the 1965 comedy Boeing Boeing has the Boeing Company caused such worry. The film was about a man who happily juggled romances with three stewardesses who were never in Paris at the same time due to their work schedules. When Boeing brought in the faster jets, the women’s extra Parisian layover time caused scheduling conflicts for Curtis.

Luckily for Boeing, the self-anointed “mainstream media” has protected you from the allegation that vital components in its 737NG (New Generation) aircraft’s fuselage were hammered and cut together by hand in a small Ducommun factory in Gardena, California. A working-class LA suburb, Gardena has been a haven for low corporate and property taxes since 1936, when Ernie Primm opened the town’s first poker club. Taxes from the clubs kept the City Council going, often with extra subventions to individual councilmen. I don”t know what Gardena is like now, but in the 1950s, its corruption was a smalltime version of Chicago’s.

Once Ducommun made the parts by hand in Gardena, they shipped them to Boeing’s Wichita assembly plant. In Wichita, workers assigned to make the parts fit other parts found that, well, they didn”t. That is what is contended in the lawsuit brought by three Boeing employees who were fired after alerting management to the faults.

Boeing doesn”t own a network, but the U.S. media are politely ignoring the lawsuit alleging that the 737NGs it manufactured with Ducommun parts between 1994 and 2001 are unsafe. The West Coast radical magazine Mother Jones wrote about this in 2005, but it didn”t rate much attention elsewhere.

“Boeing doesn”t own a network, but the U.S. media are politely ignoring the lawsuit alleging that the 737NGs it manufactured with Ducommun parts between 1994 and 2001 are unsafe.”

Last week, Al Jazeera’s English television channel broadcast an investigative documentary about Boeing, On a Wing and a Prayer. Watch the film to see what a good documentary does. The filmmakers followed the trail step-by-step, the old-fashioned way. They ferreted out documents and interviewed key witnesses. Such reporting used to characterize ABC News” Close-Up (which once exposed the Israeli machinations behind the 1982 massacres in Beirut’s Sabra and Shatila refugee camps), CBS News” 60 Minutes, ABC’s Nightline when Ted Koppel and Tom Bettag ran it, BBC’s Panorama, and Thames Television’s This Week. Thames’s courage in broadcasting Death on the Rock in 1988 is thought to have cost the company its broadcast license.

The big networks don”t bother with that kind of “investigative” thing anymore, not when they can interview Britney Spears about her thongs and “reveal” that some actor somewhere is cheating on some actress. Why would NBC investigate defense-contract lobbying by its parent company General Electric? Would it make sense for ABC to look into the property deals and hiring practices of its owner, Disney? Would anyone at Fox last long proposing a documentary on illegal telephone tapping by Rupert Murdoch’s London journalists? Would GE, Disney, and Newscorp’s board members want their reporters to expose other corporate boardrooms with whom they do business and socialize?