Boering Our Way to Victory 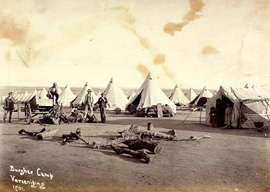 Back in the days of $16 barrels of oil (it really was that low only a decade ago) when all the brouhaha began in the wake of the 9/11 hysteria and the “Axis of Evil“ speech, some of my colleagues were discussing what ought to be done in light of our Afghan invasion and the all-but-certain Iraqi imbroglio.

I listened to erstwhile political allies discuss how we should invade, occupy, and otherwise “teach them a lesson.” It was clear the Afghans and Iraqis on the ground would pay the price of the tutoring.

As the heretic I am, I suggested we allow the Taliban to turn Osama over to The Hague as they’d offered to do under condition he be tried in a court of law with evidence open to the public. It seemed less expensive and preferable to war, which always costs more and lasts longer than we expect.

My colleagues were outraged. Clearly I did not have enough pro-American bloodlust running through my heart. I said that I was definitely against war as a solution to a problem that two earlier wars”the Soviet War in Afghanistan and the First Gulf War“had created. But I added that if America went to war, it ought to be done the effective way.

“We”ve wasted over ten years trying to give higher principles of governance to people who can”t even read.”

For those unfamiliar, the Boer Wars were conflicts over political control and independence waged in southern Africa between 1880-1881 and later from 1899-1902. The second war is what’s pertinent here. The British weren”t amateurs in those days. When they wanted a piece of land, in this case one held by Dutch farmers, they took it in the most menacing way possible.

To wit, they built a series of concentration camps to intern the region’s civilian population. Women, children, and babies were all included, often with cruel and sometimes mortal results.

As unremittingly brutal as this method was, the British won the war, took the territory, and held it profitably for the next several decades. It was only when the British went weak and lost their mettle that they surrendered the prize.

This shocked the table. Did I really mean to erect concentration camps all across Afghanistan and Iraq? Yes, but not the later German model”the original British version. In other words, detention-only.

It was obvious if war began we would be engaged for at least a half-decade and probably more. Even if peace came quickly, the examples of Japan, South Korea, and others show that once the American boot is planted on foreign soil it takes firm root.