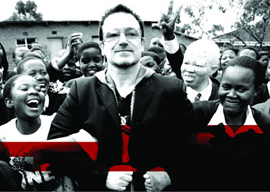 The guests were singing maudlin folksongs trying to drown out the TV’s noxious noises. Live Aid had been going on apparently forever and would go on for weary hours more, and even at a whiskey-sodden wedding reception it seemed no one would be allowed to hide from the hurricane of “Humanity.”

Musically, that 1985 evening was a worthy successor to 1984’s “Do They Know It’s Christmas?” of which Morrissey remarked, “One can have great concern for the people of Ethiopia, but it’s another thing to inflict daily torture on the people of England.” But that, of course, was not The Point.

Prominent in the conscience-pricking proceedings were Bob Geldof and Bono. Geldof’s Boomtown Rats had always been more of a pest than real rats. At least literal rodents had the decency not to inflict “I Don”t Like Mondays” onto the world. Now the rocker had assembled some genuine musicians to, know wot I mean, light a fuckin” rocket up the, like, rich fuckin” West and much else in a similar fuckin” vein.

Bono had always subscribed to the usual “radicalism,” but the band’s anthemic sound had always made me forgive the clapped-out conceptual content. Even tonight he brought a rare mellifluousness to ameliorate the awfulness. One of the older guests slurred, “Why doesn”t that lad give all his fecking millions to the fecking Ethiopians?” It was a sage point, or pint. Why hadn”t Bono? Everyone knew about the mansion in one of Dublin’s handsomest “burbs, his tax ishoos, the amounts expended on “designer shades,” and the piquant fact that he obsessively watched footage of all his performances. But he was an entertainer, and who didn”t pity the Ethiopians? Many at that wedding had already made donations to Live Aid”for them, it was merely the latest gift to what Irish Catholics affectionately call “the black babies.”

Time elapsed, Africa stagnated, and the Celtic chums continued to agitate for aid and angst. The Hibernian humanity-huggers became Persons of the Year and Heroes of Our Time and nearly got the Nobel Peace Prize.

From the outset, Fleet Street’s un-finest had suggested that the boyos were exploiting misery to assist their careers. Unfair, but their charms did pall. In a 2005 New York Times essay, the well-disposed Paul Theroux wrote wearily of “mythomaniacs, people who wish to convince the world of their worth.”

It looked bad that Bob was the 18th wealthiest broadcaster in Britain, a non-domicile whose UK properties were owned in the British Virgin Islands. He flew first class to speak in luxury hotels about poverty. He spoke out all the time on everything. His concerts may have raised over £150 million (despite accusations of racism because no Africans performed), but it was muttered that much of the moolah was missing or was being spent on munitions, a story revived this year by the BBC.

Bono told the crowd that every time he clapped his hands, a child died in Africa. In the impressed hush, some joker shouted, “Well, stop clapping, you arsehole!”

The concerts had definite beneficial effects, though, according to Wikipedia: “The Live 8 concerts have kept Geldof from producing any more musical output since 2001.”

Bono likewise felt The Edge of criticism, with cavils about finances and fallout from Christian Aid, African Aid Action, and even Bloomberg Markets, which disclosed that U2’s revenues (US$311M from one 2006 tour alone) were being offshored to minimize tax even as Bono was striving to increase tax for non-rock stars by haranguing governments to wipe out debts and increase aid. Others found something troubling about the Holier-Than-Thou One investing in the likes of Forbes and Spider-Man. There was a regrettable incident at a concert when Bono told the crowd that every time he clapped his hands, a child died in Africa. In the impressed hush, some joker shouted, “Well, stop clapping, you arsehole!”

The fashion chain Edun, set up by Bono in 2005 to boost African employment, recently relocated to that well-known Dark Continent hinterland”China. And only last month, the New York Post publicized Bono’s ONE Foundation’s 2008 returns, which showed that of US$15 million raised that year, a mere $184,732 went to charities. Although the Ethiopians may not know when it’s Christmas, staff at the ONE Foundation clearly do. Something else that’s clear is that those who really want to assuage Abyssinia’s ongoing anguish should probably be looking for more useful instruments.