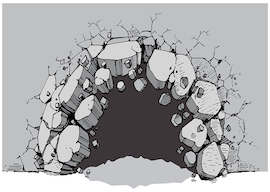 Several months into the Trump administration, I started running a daily “Border Wall Construction Update” on Twitter, announcing how many miles of the wall had been completed that day and how many miles since the inauguration. It was always the same numbers: 0 and 0, respectively.

I was immediately attacked by people in the Trump base. You’re being unfair, he hasn’t had enough time, there’s a legislative process, he’s doing the best he can.

As days turned to weeks and weeks turned to months and months turned to years, and not 1 inch of the wall was built, the “3-D chess” crowd dwindled.

Sometimes Trump would concede he hadn’t built any part of the wall. Sometimes he would fib and claim it was being built. There’s no way to sugarcoat it: That was a lie.

We are now past the midway point of Trump’s first term, maybe his only term. If Trump couldn’t come up with a legislative fix when he controlled both houses of Congress, he’s sure not going to now that he’s lost the House.

We are headed for another failed Republican presidency.

Whether these promises weren’t kept out of bad faith, incompetence or changed minds is of no consequence. That will be a minor footnote for future historians to debate. All that matters is that it didn’t happen. That’s why Trump got elected.

But he still hasn’t started the wall.

“We are headed for another failed Republican presidency.”

By now, my erstwhile critics are getting the point. But I’m not sure the president is — a few weeks ago, he unfollowed me on Twitter.

Trump seems to be mystified about what he needs to do to maintain the support of his most devoted backers. He’s saying the right things, isn’t he? He’s holding press conferences, giving Oval Office addresses and tweeting that he wants a wall.

Here’s what you haven’t done, Mr. President: You haven’t broken ground. You want your supporters back? BREAK GROUND TODAY.

What you need to do today — not after the State of the Union address, not after the next GOP retreat, not after another meeting with the Democrats — is to start rolling construction trucks to the southern border.

When Obama wanted something done, he did it. After spending two years saying he didn’t have constitutional authority to amnesty Dreamers, he issued an executive order amnestying Dreamers.

Obama has a legacy — a terrible legacy, but a legacy nonetheless. We’re still living with that executive order today.

By contrast, Mr. President, you do have constitutional authority to defend the nation’s borders, as you have noted repeatedly. But you’ve chickened out. The only edifice you have built is constructed of tweets, press conferences and speeches.

Ironically, Obama was a man of action. The New York real estate tycoon is just a man of words.

Words don’t stop caravans. No one rushes to a caravan saying — WAIT! STOP! TRUMP IS ABOUT TO TWEET!

Are you sure you want to make a dangerous 700-mile journey through cartel-infested lands when you know that as soon as you get to the U.S. border, there could be a Donald Trump tweet awaiting you?

The Senate’s latest omnibus spending bill provides “not less than $15,000,000” for border security — in Pakistan. The border security of our own country has become a joke. BREAK GROUND TODAY.

It’s great that you met with the Clemson football team, but while you were doing that, people were crossing the border who will kill Americans. BREAK GROUND TODAY.

Fifty years from now, an American family will pile into the car to see the country and, while motoring by the Texas border, will slam on the brakes. Oh look, honey, here’s a historic site! They’ll blow the dust off a small plaque on a garden trellis that will read: “On this site, President Donald Trump built the impregnable southern border wall.”

Stanley, you have to step to the left — you’re blocking the whole thing!

There will be plenty of room in the Trump Presidential Library for the entire border wall, because the library will contain only two books, “The Art of the Deal,” and Trump’s follow-up book, “Never Mind.” BREAK GROUND TODAY.

Emergency powers or no emergency powers, on tomorrow night’s news we want to see helicopters circling the trucks headed to the border. BREAK GROUND TODAY.

Cost: People who don’t like you will continue not to like you. Benefit: Your legacy will be — He kept Americans alive who would otherwise be dead. BREAK GROUND TODAY.

We’ve heard your speeches. We know you understand the crisis, and you know what needs to be done. But none of that will mean anything if you don’t take action — not in a month, not in a week, but today. BREAK GROUND TODAY.