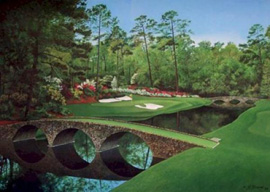 The Augusta National Golf Club, the only course to host a major championship each year, has invited its first two women members”former Secretary of State Condi Rice and Darla Moore, wife of dying financier Richard Rainwater.

Granted, it’s August, and the hurdle for making the headlines is low. Still, it’s worth using news stories to consider how elite institutions such as Harvard University or Augusta National, the home of the Masters Tournament each April, make their selections.

While the teen Bill Gates was admitted into Harvard, America’s richest man had to wait years to be invited to join Augusta National, even though the second-richest man, Warren Buffett, sponsored him.

Gates quickly dropped out of Harvard, while he continues to play golf at Augusta, implying that the Georgia club might be better at delivering on the nominal reason for its existence”golf”than Harvard is at educating.

“Contrary to all the press accounts presenting Augusta National as a last relic of the Bad Old Days, all-male golf clubs have never been common in the US.”

It’s widely assumed (by people who will never be invited to join) that members join to hammer out billion-dollar deals with each other while playing Amen Corner.

Yet that’s not quite how it works.

Although golf courses all look alike to non-aficionados, they differ in appeal. Augusta National not only has a beautiful layout, it’s a famously intricate one that demands even the most hyperactive deal-maker’s full attention.

Designed by Alister MacKenzie at the bottom of the Depression and remodeled repeatedly by others, Augusta National is a landmark in the history of golf-course architecture as an art form. It marks the transition between the complexity of the 1920s” golden age and postwar modernism’s sweeping simplifications.

One irony is that Augusta National is slowly going out of style aesthetically, as tastes in golf-course design revert from Bauhaus-inspired rationalism to Scottish eccentricity and thrift. But that’s a little like saying the Four Seasons restaurant on 52nd Street isn’t quite as fashionable as it was when JFK dined there.

None of this is to suggest that Augusta National members are disinterested aesthetes. While openly doing business at the club is discouraged, the right to invite clients to play is membership’s most obvious benefit. Augusta National is the trump card of networking, far exceeding any Donald Trump golf course that costs far more.

So why did Augusta National immediately add a black member after Shoal Creek, site of the 1990 PGA Championship, was widely criticized when its founder let it slip that it was all-white? (Looking at the Augusta National membership list printed in USA Today in 2004, I can pick out at least as many black members as Jewish ones.)