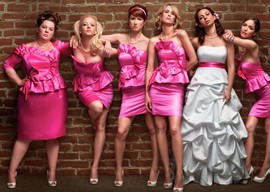 Bridesmaids, the first female buddy comedy from producer Judd Apatow (Knocked Up and countless others over the last half-decade), stars Kristen Wiig, that passive-aggressive skinny blonde on Saturday Night Live. It’s been marketed to film critics as the definitive response to Christopher Hitchens’s 2007 contention in Vanity Fair that women aren”t funny.

For reasons of ideological conformity, reviewers are antsy over how cinema has been male-dominated for decades. At the movie theater in Van Nuys, the girl in front of us in line for the box office happily described to her date the potential merits of their seeing Something Borrowed, Water for Elephants, or Jumping the Broom. Then he put $23 down for two tickets to Fast Five. He pays, he picks.

Bridesmaids never came up in their discussion. It’s not really a Van Nuys movie. Sure, it has gross-out laughs combined with Apatow’s (annoyingly sensible) moral didacticism. Nevertheless, like most Apatow movies, it’s aimed at roughly the upper third of the market. The mass audience wants wish fulfillment, while the college-educated crowd likes frustration and irony, which Wiig certainly delivers.

“It’s refreshing to see a movie where women compete not over a man, but, realistically, over social status among women.”

She plays Annie, a Milwaukee chef whose life is falling apart because her hipster downtown bakery went broke in the recession. Now she has to share an apartment with, inexplicably, a brother-sister pair of hostile, obese near-albinos from England. Apatow has the fat blonde girl do a dead-on impression of tall, dark Russell Brand, smug star of the producer’s Forgetting Sarah Marshall and Get Him to the Greek.

Worse, the heroine’s lifelong best friend, played by Maya Rudolph, is getting her life in order. She announces her engagement to an upwardly mobile Chicagoan and asks the already stressed Annie to organize the formal events.

Rudolph has been a terrific utility infielder for Saturday Night Live for a decade because”as the daughter of the late soul singer Minnie Riperton and Dick Rudolph, a close friend of Gwyneth Paltrow’s dad”she can play black or white. (In 2006, Rudolph was black in Idiocracy and white in A Prairie Home Companion.) In Bridesmaids, however, the reliable sketch comedienne is merely asked to play a character much like herself”the sweet-natured daughter of an affluent black-white couple”which doesn”t leave her much to do.