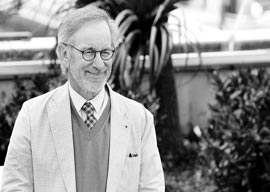 With Spielberg’s eye for re-creating the physical environment of his childhood years, a screenplay rewritten by the Coen brothers, and Tom Hanks as master negotiator James B. Donovan, Bridge of Spies might well be better than Argo. Yet, while the liberties taken with history didn”t much hurt Argo‘s impact (unless you are a Canadian annoyed by the diminishment of the heroic Canadian role), the rewriting of Bridge of Spies“ leading man to make the role more suitable for Hanks” famous regular-guy routine has left Spielberg and the Coens seeming a little furtive.

Spielberg should focus upon period pieces set during his youth, in the manner of his sunny soufflÃ© Catch Me if You Can. So I can”t complain that Bridge of Spies takes place in Spielberg’s wheelhouse years of 1957″1962.

The new film appears intended to serve as the minor-key complement to that 2002 comedy. Hanks, who played the FBI agent chasing Leonardo DiCaprio in the earlier film, now is lawyer James B. Donovan, who first defended Abel in court.

It’s not clear what Abel did to earn his pay from Moscow in 1950s New York except hang around with various leftist portrait artists such as Jules Feiffer and Burton Silverman (who later painted the cover of Aqualung for Jethro Tull) while they moaned about the dominance of abstract expressionism (which was backed by the CIA). Spielberg is of course a big fan of Norman Rockwell, so in Bridge of Spies he seems to view Abel’s amateur socialist realist paintings during the Jackson Pollock era as a major factor in the spy’s favor.

This is a darkly lit film, much of it taking place in frigid, devastated East Berlin, with multiple characters coming down with the sniffles. Most of the supporting actors appear to have been chosen for how they can be lit to look grotesque. Spielberg doesn”t do things by accident, so the ugliness of the minor characters is likely intentional, but I don”t really know why Spielberg did this.

“The biggest historical integrity problem with Bridge of Spies is that James B. Donovan is rewritten to be an average American nobody.”

Scott Shepherd is cast as the main CIA man, and he is made up to look like a stereotypical Yale Man to the point of congenital deformity. That’s standard practice in movies”you can almost always recognize the CIA’s inbred WASP goblin from the moment he comes on screen. For reasons of ethnic resentment, when casting their thin, balding CIA agents, filmmakers tend to take the CIA’s traditional connection to Yale’s Skull and Bones Society a little too literally.

But why is the actor who plays pilot Powers made up to look like the Unfrozen Caveman Cast Member of The Right Stuff? My main memory of Powers from when I was a kid is as the nervous but amiable eye-in-the-sky traffic reporter on local radio station KGIL. He was much criticized in 1960 for not using his suicide device, which may be why when his sky-watch helicopter was heading for a crash landing on a baseball field in 1977, he dove it into the ground rather than risk wiping out a Little League team. Powers seems like an interestingly tragic figure, one that Spielberg could do justice to, so I don”t get the film’s off-kilter portrayal of him.

Maybe there’s a bit of Dick Tracy in Spielberg’s conception for Bridge of Spies? Chester Gould’s cartoon strip was hugely popular when the director was a kid; J. Edgar Hoover was a big fan of Dick Tracy; the villains were grotesque; and it featured lots of cool gadgets like those Abel was equipped with, such as his infamous Hollow Nickel that a 14-year-old newsboy discovered, setting the FBI off on a four-year-quest for its owner. (This made-for-Spielberg scene is omitted from the movie.)

Hanks plays Donovan as his usual American Everyman, an obscure outer-boroughs insurance lawyer, a junior partner who deals with traffic accidents. When the deep-cover Soviet spymaster is arrested in New York City in 1957, the Brooklyn Bar Association assigns the unlucky Donovan the job of defending the mole to show the world that the American Way provides even an obviously guilty Commie rat with a lawyer.

The plucky outsider puts up a whale of a defense, making him hated by the reactionary Establishment, who fire bullets into his house. Donovan courageously takes his motion to have the Hollow Nickel and other physical evidence thrown out on some ridiculous technicality all the way to the Warren Supreme Court, where he loses, but only by 5″4.

The underdog attorney does save Abel’s life by pointing out to the trial judge that he would be more valuable to the U.S. alive as trade bait for a captured American spy. This proves prescient, because on the CIA’s first-ever overflight of the Soviet Union, Power’s U-2 is shot down.

Donovan receives a letter from Abel’s wife, which he interprets as a Kremlin offer to trade Powers for Abel. He takes the letter to Secretary of State John Foster Dulles, who dispatches him to East Berlin to close the deal. Various complications arise, but Donovan ultimately brings home not only Powers but also an American grad student kidnapped by the East German Stasi.

By Hollywood standards, the history in the movie isn”t particularly fictitious, although nobody ever shot at Donovan’s house. (He actually lived in a 14-room condo in Prospect Park.)

More strangely, the movie gives the impression that Power’s doomed flight on May 1, 1960, was the U-2’s first ever over the Soviet Union. It was actually the 24th since 1956.

I”m biased about the U-2 because friends of my parents helped Kelly Johnson design the U-2 at the Lockheed Skunk Works. In contrast to the national disgrace that is Lockheed’s protracted development of its F-35 fighter, the U-2 project was a masterpiece of getting-the-job-done. Only 20 months after the contract was signed, this jet-powered sailplane was violating Soviet airspace. These flights photographed 15 percent of the huge territory of the Soviet Union, and may have helped head off World War III. At the peak of Khrushchev’s bellicose boasting after the 1957 Sputnik launch, Eisenhower had photographic evidence that the Soviet military was less formidable than claimed.