Bring Back the Duel 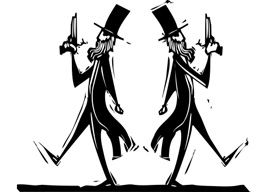 I didn’t go to college, let alone law school. So when I started joking a few years back”in response to my own legal troubles“that “libel is what we got when we abolished dueling,” I had no idea that’s exactly what happened.

“The offence originated in England at the time of the Court of Star Chamber with the intention of preventing dueling,” explains one of Canada’s top lawyers in his recent call for the abolition of our criminal libel laws.

Wow, who are these sinister menaces to Canadian society, you’re wondering, these heedless breachers of the Queen’s peace who need to be tossed behind bars?

Well, there’s the restaurant owner sentenced to 90 days in jail for “publishing false material concerning an online restaurant reviewer;” the protester who blogged mean things about two cops; another guy who wrote mean things about some cops and a judge; and, er, the dude who texted nude photos of his ex-girlfriend.

“As an alternative to libel suits, there is no downside to dueling.”

Bob Kane at the height of his creative powers would have a hell of a time turning these folks into credible Batman villains.

So for instance, this fellow waited until his “libeler” moved to the Great White North before serving him, and you can’t buy a major Scientology tell-all north of the 49th parallel.

To our credit, Canada”like every other nation except the United States“is at least a “user pays” jurisdiction, so we’re not burdened by what I call “lottery law”: all those “I spilled hot coffee on my lap!” (non-defamation) suits that have contributed so greatly to America’s economic and moral decline.

When someone does sue for libel in the US, it provides cheap entertainment for anyone not directly involved. How do you serve “Bubba the Love Sponge” without laughing? Then there’s the non-Nobel Prize winner who sued Dr. Tim Ball for joking, “Michael Mann at Penn State should be in the State Pen, not Penn State.”

Tort reform is desperately needed throughout the English-speaking world, and once in a while, our robed betters deign to nibble away at the law around the edges.

We all know that true, lasting tort reform will never happen, because lawyers are too politically powerful.

That doesn’t matter, though. Defamation will eventually atrophy into extinction as social mores change, as have previous subspecies of libel (the “blasphemous” and “seditious” kinds).