Bring Us the Head of Ronald McDonald 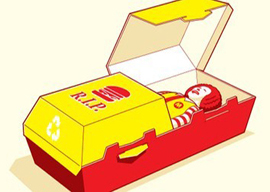 Among the thousands of wailing grievance groups the progressive left nurtures, enables, coddles, and waters, “food activists” tend to be among the most humorlessly fascistic. Considering the other contestants, that’s saying a mouthful”in fact, it’s like trying to recite a Shakespeare sonnet with an entire Double Quarter Pounder crammed in your yap. Out here in flyover country where the normal people live, taking candy from a baby is considered easy and cruel, but it took the reputedly compassionate denizens of San Francisco”a population not exactly known for its fecundity”to decide it was an act of kindness to pluck the toys from children’s Happy Meals.

Last December, a group named Center for Science in the Public Interest”whose litigation director Stephen Gardner has said that “McDonald’s is the stranger in the playground handing out candy to children””helped a Sacramento mother of two file a class-action lawsuit against McDonald’s for the unforgivable crime of including toys in their Happy Meals. “I object to the fact that McDonald’s is getting into my kids” heads without my permission and actually changing what my kids want to eat,” moaned the mother, Monet Parham. “For the sake of other parents and their children, I want McDonald’s to stop interfering with my family.” When McDonald’s filed papers to dismiss the lawsuit, Gardner said that “McDonald’s has chosen to blame the victim”saying that it’s all Monet Parham’s fault if she doesn’t force her daughter to ignore the onslaught of McDonald’s marketing messages.” A “food activist” writer named Michele Simon called Parham a “brave…mother of two” who endured a “fierce and ugly backlash” for being fearless enough to step into the spotlight and admit she’s too chickenshit to tell her children “No.”

In February, a group of idealistic young Finnish nimrods calling themselves the Food Liberation Army stole a Ronald McDonald statue from a Helsinki McDonald’s and filmed a mock terrorist video in which they lopped off his head.

“Sorry to be a dick about it, but is it impolite to suggest there are other possible causes for childhood obesity beyond Ronald McDonald?”

In March, a bevy of Philadelphia nuns”and speaking from personal experience, they are among the cruelest individuals on the planet, especially toward children”filed a Proxy Statement with the SEC demanding that McDonald’s admit its culpability in creating the childhood-obesity epidemic.

Last week, America’s ragtag coalition of Food Nazis finally emulated the Finnish Method and went after the Big Kahuna himself. A “grassroots” (i.e., they operate on a $3.7-million budget and their director makes $85K a year) group called Corporate Accountability International took out a series of full-page newspaper ads urging McDonald’s to retire their iconic Ronald McDonald character, the corporation’s world-famous “spokesclown” and official “Chief Happiness Officer.” So far their open letter has reportedly been signed by over 1000 physicians, as well as one openly racist group after the next. (In homage to the Fairness Doctrine, I”ll note that McDonald’s also engages in blatantly racist marketing.)

Judging from the rhetoric of those who are clamoring for Ronald’s head, one would think they”d discovered a secret document called The Protocols of the Learned Elders of McDonaldland. The aforementioned Michele Simon, apparently the Andrea Dworkin of literary food hysteria, has stated without winking that “The Happy Meal is a crime”and not just a culinary one.” Simon authored a 32-page document called The Case for Ronald McDonald’s Retirement that contained the following unintentionally hilarious passages:

To most children, Ronald McDonald is the very embodiment of McDonald’s. But Ronald McDonald is far from an innocent clown….As history demonstrates, Ronald has no difficulty speaking out of both sides of his mouth….[C]hildren have the right not to be preyed upon by a clown with a corporate agenda….McDonald’s has deflected responsibility for making kids sick….Parents deserve a break from the nagging and pestering that the clown’s tactics foster. We all need a break from Ronald McDonald.

A press release by Dr. Alfred Klinger on the “Retire Ronald” website is likewise chock-full of unwittingly golden McNuggets:

My concern today is Ronald McDonald. This clown-like figure which is playful, joyful, and cheerful is in fact a pied piper drawing youngsters all over the world….At the same time he gives them the secure feeling he is harmless….But, in fact, Ronald McDonald is dangerous….We want you to retire Ronald and we want you to do it quickly!

To make matters yet more ridiculous, members of a spiteful and player-hating “clowning community“ have jumped into the fray to demand Ronald’s resignation and to help market the notion that he’s the deadliest clown since John Wayne Gacy.

Lawyers who”ve signed on board to fight Ronald McDonald”and, to be blunt, make enough money in the process to buy as many joyless and toyless high-priced cruelty-free organic lunches as their unclogged hearts desire”argue that McDonald’s Happy Meal ads are not protected by that pesky and intrusive First Amendment. They say that children under age eight are too young to realize they”re being “marketed to” and thus become hypnotized by the evil clown’s bright colors and seductive smile. In fact, there don”t even need to be any false or demonstrably inaccurate statements in the ad for it to be “deceptive,” because according to the American Academy of Pediatrics, “advertising directed toward children is inherently deceptive and exploits children under eight years of age.”