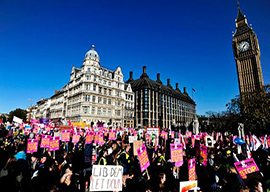 Well, knock me down with a fire extinguisher (preferably dropped from a serious height). British students are out on the streets protesting loudly against a tuition-fee hike. As one cynic observed, television scheduling must have been lousy that day. For here we see members of a privileged breed”Idlelayabout Bastardus“crawling from their bedsits and residence halls, gathering to march, shout, and stamp their tiny feet. Good on them, even though nobody else gives a damn.

For all the froth, fury, throwing of fireworks, and assaults upon Prince Charles’s limo, the students will not garner popular support. They will mount sit-ins, daub graffiti, and parade their placards and phonetically spelled slogans. But nothing will disguise the faint whiff of self-indulgence. Gone are the big issues of Vietnam, nuclear disarmament, love, and peace. In their place are youths in grimy underwear and unwashed clothes shouting, “Me! Me! ME!!!”

They are victims not of Tory policy, but of their own egos and overweening expectations. This is the freeload and free-download generation, a group weaned on entitlement and bred to believe in what P. J. O”Rourke dubbed “gimme” rights. The poor, misguided fools. They have come of age just as the perfect storm arrives, a tempest created by the previous Labour government both espousing a “crap in/crap out” approach to university admissions and bringing the country to the verge of bankruptcy. There simply is no money.

Naturally, this truth does little to pacify the indignant shrieks from the enraged and entitled student fraternity. They do not wish to pay for their further education. They believe we owe it to them and ourselves to subsidize their personal self-improvement journeys. In providing them finance we are, they insist, investing in Great Britain’s future prosperity.

“Tens of thousands of university students”most of whom seem unable to spell or form a working sentence”graduate each year with their embossed certificates and vastly inflated views of their prospects and abilities.”

Forgive my skepticism, but my house requires the attention of a reliable electrician and plumber, not a half-baked and poorly written essay on media studies or art history. Tens of thousands of university students”most of whom seem unable to spell or form a working sentence”graduate each year with their embossed certificates and vastly inflated views of their prospects and abilities. They graduate knowing how to sink a pint, smoke a spliff, sleep through tutorials, and even walk on water. Watch out world, here they come. Sadly, the currency is utterly debased and the unfortunates discover plenty of their own kind in the open market, all waving the same meaningless scrap of paper.

We do not need these graduates, or at least the kind who are spoon-fed and module-based and who acquire intellectual and academic pretensions without ever being intellectual or academic. The system is incontinent, processing the same shit year after year, and we are the ones charged for the cleanup. And still the students insist: “We are worth it. We matter. We are a glorious asset to the nation.” I beg to differ. The majority of top-flight universities are American and are therefore privately endowed and not state-funded. They thrive and the country reaps the benefit. Britain needs a similar level of excellence without the taxpayers being hobbled.