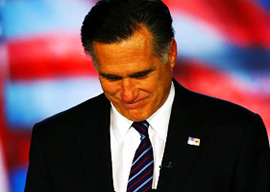 It is traditionally said that after the Lord Mayor’s Parade come the guys with brooms and shovels to clear the pavement of whatever the parade horses may have bestowed upon it. Well, the election’s over, and here I come with broom and shovel to see if there’s anything instructive to be found in the droppings.

In a pre-election piece I opined that I couldn’t see much daylight between the two parties. Three weeks later, in an election-night piece, I confessed to having voted anyway, for Mitt Romney and everyone else on the conservative/Republican line, on account of my kids”one pushing, one pulling.

On the matter of there being little to choose between the parties, I didn’t just have a hold of the zeitgeist by his coattails, I was well-nigh tandem-jump skydiving with the old ghoul.

This won’t improve. It’s been the unanimous opinion of the post-election commentators that what the GOP must now do is make itself more like the Democrats. Women and minorities on the ticket! Shut up about abortion, gay marriage, and Jesus! Comprehensive immigration reform! Keep the millionaires out of sight!

It wasn’t hard to spot this trend. In the nation of my birth, it’s been going on for decades. Fifty years ago the Labour Party, though trending fast toward managerialism, still featured fiery Marxist agitators with an Order of Lenin in the dining-room dresser, longhaired scholarly misfits from magazines printed on low-grade paper, and horny-handed sons of toil from outfits such as the Boilermakers Union.

One scholarly misfit scandalized respectable British opinion as late as 1981 by wearing a duffle coat to the Veterans’ Day wreath-laying ceremony. And it was one of those horny-handed sons of toil, I forget from which union, who in respect of some rumored scandal among the brothers declared from the podium of the Trades Union Congress that “I’ve heard these allegations, and I know who the alligators are….”

The Tories, meanwhile, were still recognizably the toffs’ party; not so much the highest of the high toffs”mid-20th-century Tories, though patriotic and monarchist, always thought the Windsors were politically…unsound“as the business classes and the country squirearchy. Farmers were Tory, your local realtor was a Tory, and the board of Imperial Chemical Industries was all Tories.

You had something to get your teeth into there. Either you wanted to stand atop the ruins of Buckingham Palace waving the red flag, or else you were of the same kidney as Tory poet Philip Larkin, who sketched out his political program thusly in a letter to fellow curmudgeon Kingsley Amis:

Prison for strikers,
Bring back the cat,
Kick out the niggers,
How about that?

Nowadays, after the brief Thatcherite interlude (sigh), Labourites and Tories are indistinguishable: sleek young metrosexuals in thousand-dollar suits whose thoughts stray not one millimeter from the dogmas of the New Universal Faith“globalism, feminism, multiculturalism, gay rights, “human rights,” and all the rest of the snot, dandruff, and earwax we have to pretend to believe if we want to avoid the attentions of the Thought Police.