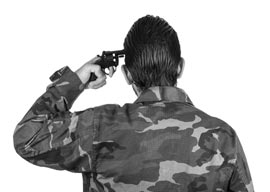 My hands shook as I spot-checked my dress blues. I took the two brown paper bags and walked toward the memorial. The monument was wreathed in sentiment.

A man I”d never met saw me approach. His beard was prematurely graying. He stuck his hand out and threw his arm around me.

This was his ritual. To have a beer with his buddy. He gently told his young son to read all of the names. The boy complied. I placed three little bottles of whiskey on the stone. I took a fifth of Wild Turkey out of the second bag and we toasted in silence.

We looked at the names together. I learned that we”d served in the same company, years apart. He “introduced” me to one of his buddies.

The heading on the stone read: Died in Service.

A few names down, I saw one I recognized. Then another. And another. My heart sank. An entire side of the monument was dedicated to suicides. I knew as many people on that list as I did on the others.

That night, another soldier on base killed himself. Self-inflicted gunshot wound.

There is an oft-quoted statistic that 22 veterans kill themselves every day. It’s a bullshit number. The study that produced it even admits this.

Data can tell you anything, in any manner, depending on whatever agenda is driving it. It won”t tell you why a kid put a tourniquet around his neck and cinched it tight.

“War is nasty and brutish. War is no good for anyone…but at least it’s fucking real.”

We carried tourniquets everywhere in Afghanistan. If one of us stepped on a pressure plate, the tourniquets might be the only way to keep from bleeding out from what was left of a limb. A tourniquet might save your life.

There was an awful kind of poetry to it. It was a memory I didn”t want to revisit. The problem is that war is swell…

After Vietnam, the military went on an extended public relations campaign to fix its image. The “baby killer” stigma was bad for business. It made the fight for funding in a drawdown exceptionally difficult.

The Cult of the Yellow Ribbon was born.

Fast-forward to the Global War on Terror (GWoT). These days, most Americans will thank a veteran for his service before they”ll spit on him and call him a baby killer. I have experienced both, although the former happens much more than the latter.

This is generally a more favorable condition than the disgust, disdain, and disregard experienced by “Nam veterans. GWoT veterans hold them in reverence, both for the conditions under which they fought and for the inexcusable treatment they received at home.

The trouble with this paradigm shift is that veterans cannot speak openly about their experiences. They can”t tell you that it is gratifying to watch an IED emplacer get cut in half by an Apache gunship, because the heat signature now redistributed along the roadside was responsible for taking the lives and limbs of their buddies.

If they do, they queer the image that the military has tried to build for itself of clean-cut professionalism.

Both extremes of civilian response are symptoms of the real problem. Society has become disconnected from the reality of war and the reality of life in the military. Civilians respond with the compulsory “thanks” because they don”t know what else to say.

This disconnect only serves to further alienate veterans from civilians. Veterans become insular to avoid the sort of strained interactions that happen in Civilianland. Sentiment, however well-intentioned, is not enough to cross the human distance that our culture of beautiful snowflakes creates.

War brings men closer together out of necessity. Virtually everything a soldier does is deliberate and necessary. Even smoking a cigarette. It might just be the thing that gets a guy through a bad day.

Back in the States, life feels arbitrary. Civilian relationships can feel forced and unnecessary. In the States, veterans are forced to rationalize in their head what they feel in their heart.

This leads to resignation, withdrawal, and isolation.

One of the awful truths about war is that the kind of man who would volunteer for it has, at some point, chosen to take some agency in his own death. He may not get a choice between bomb and bullet, but at least he won”t go out on his back, rotting of cancer.

War is nasty and brutish. War is no good for anyone…but at least it’s fucking real.

He wasn”t talking solely about combat. This is a mostly unspoken understanding that defines the breed. It is a difficult mindset to explain to a civilian shrink who has never been punched in the face.

I thought of the suicides I knew.