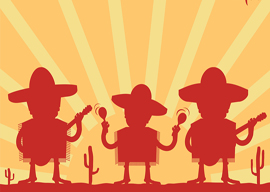 Two months ago, I wrote about my hometown and its so-called Mexican problem. I made the point that, generally speaking, most white and Asian Angelenos are okay with the “browning” of traditionally black neighborhoods. More than that, I argued, Mexicans actually do a lot of good around here, from providing cheap but (low-) skilled laborers for our all-important agriculture industry, to supplying the background players who keep our service industry afloat. Well, did I get emails! Most suggested (often in very colorful language) that I should be a rider on the first Trump Train of deportees heading south (“If you love your damn Mexicans s”much, I hope you enjoy being on that side of the wall with “em, buster”). Now, normally I don”t base columns on reader mail, but in this case, I received feedback from several respected colleagues, including Kathy Shaidle, who raised some very salient points, so I thought I”d respond to them publicly (with her permission, of course).

Apparently, Kathy doesn”t share my faith in the abilities of Mexican laborers:

My impression is, you ask them to do something and they do it WRONG because they don”t speak English, and because they have a different concept of “civil society” than I/we do. I”m a Carolla-head, but watching “Catch a Contractor” practically gave me hives. Amusingly, even anti-PC Carolla (or his producers) went out of their way to find incompetent whites, blacks and even an Israeli! I”m not as convinced as you are that if the Mexicans left (and taxes were cut…) California wouldn”t turn back into the Place White People Go To Make Good. I really do think the vacuum would be filled by whites, not blacks. I always picture the high-IQ whites going to California and the lower ones to Florida(!)

“If you have thirty guys building a house, why would you even want to be able to converse with each and every one of them?”

We Canadians mow our own lawns AND shovel our own snow and, yes, build our own decks/buildings. The swarthiest a Toronto construction crew gets is Italian, going back generations. And at least they have a proud history of marble, iron and brickwork behind them. Is all the cheap labour really “worth” it with the anchor babies, the scofflawing and the inevitable language wars? Believe me, having two official languages and “distinct societies” isn”t a recipe for national happiness.

I bristle at the notion that L.A. homeowners such as myself would entrust our property to bad laborers. I mean, c”mon”we”re Californians, but we”re not retarded. If Mexicans weren”t good workers, we wouldn”t use them. In terms of manual labor, the worst workers out here are whites, because they trade on their skin rather than their skill. “Hello, I”m Ian Rutherford Alabasterskin. I”ll do your drywall, and gosh darn it, I”ll always speak with you in the King’s English!” Every guy like that I ever hired fucked the job up royally. Because they half-assed it, as what they”re selling is not hard work, but rather (misplaced) confidence that a white guy is “better.” They trade on their race like blacks do. The truth is, you don”t need every Mexi on a work crew to be English-fluent; just the foreman. If you have thirty guys building a house, why would you even want to be able to converse with each and every one of them? That’s silly. It’s like saying, “I won”t eat in a Chinese restaurant unless I know that everyone in the kitchen has a college-level grasp of English.” If I”m having a house built, I don”t need to know that every single nail-hammerer could compete with me at Scrabble.

Regarding field labor, you can”t compare the needs of a place like Canada with California regarding agribusiness. My state could buy out that entire country with our agri-dollars. And I”ll tell you, whites won”t work those fields. My whole life I”ve been surrounded by “struggling” actors and actresses. They”re the only women I date, and they”ve always made up the majority of my white friends. Meaning, I”ve known poor whites here in Cali. Very poor whites. Because most actors out here make zero bucks at acting. So believe me when I say this: When young white Angelenos go broke, they DON”T sign up to pick lettuce. That’s not even on their radar. They either find a rich dude to support them (if they”re female or gay), they go back to living with mommy and daddy, or they go on SSI.

Southern California attracts a very specific type of white. We get the artistic “dreamers” from other states. We don”t get the Tom Joads. Here in L.A., pretty young white people with endearingly unrealistic dreams are an industry. It’s a huge business, not so much for them, but for those who make money off them. The steady influx of pretty white wannabe stars is a massive income-generator for the “high-IQ whites” and “high-IQ Jews” (redundant?) who live and work in “the biz.” Our entertainment industry is a billion-dollar concern, and as long as that’s so, the largest plurality of poor whites who move here will not be the type who do field labor.

Edwin Oslan, the Jewish alt-righter who plays Lennie to my George on our weekly podcast, brought up a different point that he felt I skirted in my original piece: the “Democrat vote” menace. A frequent talking point among anti-immigration GOPs is the belief that it’s all a plot to bring in enough Democrat voters to forever keep the GOP out of the White House. Here’s my beef with that nonsense: In the past quarter-century, a Republican has won the popular vote in a presidential election only once. Once. Are we to blame that on Mexis? Republicans have blown it, and are continuing to blow it, just fine on their own. Are we to blame GOP presidential losses in Ohio (3.6% Hispanic of any race) on Mexicans? Are we to blame the fact that the GOP has failed to win Pennsylvania (6.1% Hispanic of any race) the past six presidential elections in a row on Mexicans? As a former partisan hack, I can assure you that the “Mexis will forever keep us out of the White House” line is being pushed primarily so that GOPs will have a convenient scapegoat for their losses in years to come.

What folks who don”t live in Southern Cal don”t get is that voting isn”t really that big a deal to our Mexicans. Stuff that would enrage and energize other racial and ethnic groups doesn”t faze Hispanics. For example, Hispanics make up over 65% of the population of the city of Compton, yet only one of its eight elected officials is Hispanic; the rest are black. Be honest”would blacks be cool if that situation were flipped? You know they”d be protesting and rioting. But for Compton’s Hispanics, the “proportional representation” thing is kind of a meh. They totally have the numbers to change it…it’s just not a major concern.