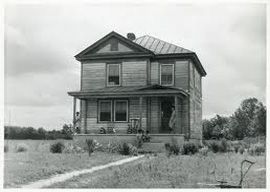 Where the left sees big government as the lesser of two evils, the right tends to side with big business. If there’s one thing both sides can agree on, it’s that nothing is more evil than both put together. Eminent domain is a slippery legal concept that combines the insatiable greed of big business with big government’s unlimited power and then sprinkles the resulting mess with incompetence. It was created to compensate citizens whose homes were in the way of important government infrastructure. Unfortunately, today we have entire communities bulldozed by corporate greed and then abandoned by incompetent bureaucrats. What may have been a good idea at the time has enabled a fascist kleptocracy to emerge.

“When I went to elementary school I heard eminent domain was for a road, a highway, a school,” says Mike Galinsky, one of the filmmakers behind a recent documentary called Battle for Brooklyn, “but it’s increasingly coming to mean tax revenue.”

Galinsky and his wife Suki Hawley recently won Best Documentary and Best Film at the Brooklyn Film Festival for their portrayal of the people behind the Atlantic Yards project, specifically a new dad named Daniel Goldstein who refused to leave his apartment. The project was basically billionaire developer Bruce Ratner convincing fellow billionaire Mayor Michael Bloomberg to give him other people’s property. Ratner promised Bloomberg he’d replace those few measly taxpayers with 16 skyscrapers, a sports stadium, and 15,000 jobs for the community. Bloomberg spent $2.1 billion to get the tenants out, and so far we have half a stadium, a parking lot, and according to Hawley, about seven new jobs for the locals.

“You can’t build a community,” Galinsky says. “You can build a series of buildings, but it takes a long time for a community to form. Community has roots and when you pull up a community by its roots, it goes into root shock.”

“Eminent domain is a slippery legal concept that combines the insatiable greed of big business with big government’s unlimited power and then sprinkles the resulting mess with incompetence.”

The Atlantic Yards story is similar to a 1951 urban renewal project where hard-working blacks were kicked out of Harlem because their homes were deemed to be blighted. As New York Post reporter Bill Haddad put it, “All of the contracts came through the political clubs. They gave it to their friends who were builders or realtors or phony corporations.” Then came the incompetence. Five years after the project began, nothing had begun and this once thriving community had been replaced with rotting, empty homes. The old residents still have reunions and talk about the good old days before big government and big business joined forces to “improve” their lives. “I feel like something was taken away from us,” a white-haired ex-resident recently lamented.

Six years prior to the catastrophe in Harlem, Robert Moses wrote in The Atlantic, “Obviously there is a limit to completely subsidized public housing, and we are rapidly approaching it.” Even he would be shocked to see the havoc that government meddling has wrought on our lives. Boomers love to pretend they created a black middle class, but blacks rose out of poverty in the 1940s when left to their own devices. They continued to grow wealthier in the 1960s’ urban renewal boom, but at a drastically slower rate. By the 1970s, when urban renewal had become a fixture of American life, black poverty stopped declining. Every time the government moves in to save the poor from themselves, we see more crime, more teen pregnancy, and more riots. Senator Rand Paul recently said:

I think the housing and urban development has torn down more houses than they’ve actually built and really I don’t think it’s been good for or eliminated any poverty through the years.