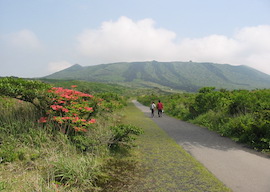 What does a Japanese lesbian jumping into a volcano have to do with American mass shooters? I thought you’d never ask! Mount Mihara is an active volcano that sits on the island of Oshima, off the coast of Tokyo. For centuries, Mihara has been an exotic destination for suicidal Japs who believe that by jumping into the volcano their body will be vaporized by the intense heat, thus speeding the soul toward its heathen Nip afterlife. Mihara suicides have always been a thing, but an infrequent thing.

Then came February 11, 1933. Kiyoko Matsumoto, a 21-year-old student, had fallen in love with a female classmate. Seeing no future for her and her resbian rover, Matsumoto, after penning a heart-wrenching farewell note to her beloved, ended it all by diving into Mihara’s gaping mouth.

And a legend was born.

The story quickly became a media sensation, no surprise as it had all the right ingredients: forbidden love, schoolgirls, and a climax of Shakespearean proportions. Before you could say “banzai,” suicide by Mount Mihara became a major fad. And a profitable one. Ferry companies added ships to offer transports at all hours, allowing only for the purchase of round-trip tickets because, you know, plausible deniability (“Ohhh, we no encourage suicide! One-way tickee forbidden!”). Newsmen used the Mihara craze to sell papers, and inns opened up on the island offering passage to the volcano’s mouth via horse, donkey, and—I kid you not—Mongolian camel.

Within three years, well over 2,000 Japanese had taken the fatal plunge. Eventually the fad ended, especially as the incipient war provided far more exciting opportunities for the suicide-inclined.

The Mihara jumpers shared no common profile. Many were under 30, but some were older. And there was no unifying reason for the suicides. Depression, dishonor, redemption, nihilism…take your pick. The fact is, in a nation in which suicide is often seen as an honorable solution (as opposed to a shameful or sinful one), the Mihara spike was simply part of what it means to be Japanese. You can overthink it all you want, but in the end, it was just a negative by-product of an otherwise orderly society. And frankly, 2,000 suicides over three years isn’t an earthshaking death toll. So we’re talking a historical blip, as bad as it may have seemed at the time.

“You believe in utopia? Go be a communist.”

Mass shootings in the U.S. seem frighteningly frequent at the moment, and everyone’s obsessed with finding “the cause.” But when we speak of “causes,” we’re talking about a tapestry comprising many threads. We have easy access to guns. We have a media that only censors when it self-censors (if our press wants to tell a story, it can). We’re a huge country with a huge population, and a far less obedient, “pacified” attitude than our faggified Canadian and Western European pals. Even our poorest denizens have access to mood-altering meds for mental illness, but at the same time, we have a system that places freedom for the mentally unstable above forced institutionalization, so mental cases who choose to go unmedicated can wander freely among us.

Nothing I listed above is by itself bad. Gun rights, free speech, large country, vestiges of frontier individualism, access to pharmaceuticals, and a high bar for involuntary commitment. But mixed together, it’s a witches’ brew that can sometimes lead to bad things. People having guns who shouldn’t, a media that rewards bad actors with fame and makes legends of their exploits, a large gene pool that includes many duds, overmedicated loons, and undermedicated loons.

A week ago, we got two mass shootings in the same day, and everyone decided to lose their collective shit, because in a nation of 327,000,000, two people doing something similar on the same day is apparently not statistically possible. As one of the shooters targeted Mexicans in the name of immigration control and the preservation of the white race or something along those lines, leftists found themselves gifted with a new scapegoat—ideology!—to complement the usual villain (guns!). And, as the other shooter was a left-wing Democrat Antifa Satanist (or something along those lines), rightists declared themselves rubber to the left’s glue, deflecting the “blame ideology” shtick right back at their foes. Sadly, rather than dismissing the ideological blame game for the BS it is, the right doubled down on it, asserting that the Mexi-murdering El Paso gunman was actually left-wing because he railed against corporations, and “his view that immigrants should be killed” was based on environmental extremism! What bollocks. All fringe ideologues, left and right, are anti-corporation. Being anti-corporate doesn’t make the El Paso shooter leftist, but advocating a white ethnostate and killing twenty Mexicans certainly puts him on the far-right side of the spectrum.

Wisely, some conservative sages jettisoned the “blame ideology” routine altogether, claiming instead that the “epidemic” of mass shootings is not a gun or ideology problem, but one of mental health. That’s both semi-true and irrelevant. Yes, quite a few shooters have had mental health issues, but some of the deadliest shooters did not have the kind of crazy that could’ve resulted in forced treatment or institutionalization. As I’ve pointed out before, Norwegian mass-shooting gold medalist Anders Breivik was so politically lucid, he could have written for FrontPage Mag or Daily Wire. Yeah, he was “crazy” to kill 77 people, but he presented as sane. Indeed, prior to his crimes, several friends of mine at the time, including the New English Review’s Kendra Mallock, considered him a solid rightist thinker.

Many shooters have a mental health “problem” the same way I have a drinking “problem”: I’m not breaking any laws, and you can’t force me to get help if I don’t want it.

Some conservatives blamed violent video games (so why isn’t Japan the murder capital of the world?), while others blamed moral relativism. That joke’s got whiskers on it. After the Columbine shooting, Tom Clancy penned an op-ed for the L.A. Times in which he insisted that the shooting could have been prevented had “contemporary society” told the two teen killers that their “role model” Adolf Hitler was a bad man. Ah, Clancy…even his nonfiction was fiction! The notion that the Columbine killers, one of whom was Jewish, had never been told that Hitler was bad is so stupid it defies belief. Sometimes people do terrible things because they’re rebelling against their instruction (the whole “most Satanists were raised Christian” thing). The Columbine kids embraced Hitler because they knew society disapproved.

Regarding religion, Sutherland church shooter Devin Kelley and Amish schoolhouse shooter Charles Roberts had both been deeply religious at one time. Roberts, in fact, framed his massacre as an act of rebellion against a God he absolutely believed in. They had not lacked moral instruction. They’d had plenty of it, and they chose to rebel.

A surprising number of rightists, jolted by the fact that the two same-day shooters were young and nerdy, blamed the “epidemic” on a feminist society that turns lonely, isolated men into “incels.” But some of our finest shooters have most certainly not been incels. McDonald’s McMassacre guy James Huberty was married with kids. Vegas shooter Stephen Paddock had himself a perfectly adequate jungle Asian girlfriend. Borderline Bar shooter Ian David Long was a strapping Marine and college athlete. And let’s not forget the oft-forgotten Mark Barton, the “day trader” shooter. Prior to killing a dozen people he blamed for his stock losses, Barton crushed his wife’s head with a hammer. That’s not funny, but this is: At the time, he was the only suspect in the murder of his first wife and her mother, who’d both succumbed to head-hammering years earlier.

Barton was the anti-incel, a man so good with women that he could murder his first wife and her mom, and immediately find a new willing wifey. That’s dictionary-definition “not incel.”

Another theory: Shooters want fame. There’s certainly merit to that argument. Much like the greedy and hypocritical Oshima Island ferrymen, the media screams, “We must end the violence,” while making every new shooter a household name. Umpqua College shooter Chris Harper-Mercer, for example, carried out his killings as an homage to the previous shooters who had become his idols. But what are ya gonna do? You can’t muzzle the press, and you shouldn’t want to. Yeah, it doesn’t help things when shooters gain immortality, but personally I’d rather live with the odd occasional shooting than with European-style press controls and gag orders.

As long as we have free speech, gun rights, an aversion to involuntary institutionalization, and a society not yet as neutered as Canada and Europe, we’re gonna have mass shootings. And yes, there will be spikes both real (the March ’98 to May ’99 school shooting wave) and imagined (“Two in one day! It’s statistically impossible!”). As Steve Sailer recently pointed out on Twitter, in the ’60s and ’70s political assassinations seemed to be the new norm in America. Then the spike just tapered off. Sometimes the ebb comes as suddenly as the flow, and if you think you’re in the middle of a flow, it really is best to hold your damn fudge and retain perspective.

That doesn’t mean do nothing. There are all kinds of precautions that can be taken to reduce the carnage caused by mass shootings. But if you’re trying to find “the cause” or “the answer,” you’re wasting your time.

In fact, you might even be approaching the issue from the wrong perspective. You’re searching for the bad things about this country that create mass shooters. Perhaps instead you should be considering the possibility that mass shootings are actually by-products of the good things about the U.S.—gun rights, free speech, and a system that favors individual freedom over public safety when it comes to mental health.

You believe in utopia? Go be a communist. In the real world, no society is perfect and you have to accept the bad with the good. It’s like the song “Pennies From Heaven.” Rain is the price we pay to have flowers, so don’t start building an ark just because we got two cloudbursts in one day. Mass shootings are still rare, and violent crime in general is down across the board in the U.S.

For once, the news isn’t actually that grim. Opinion journalists will always inflate a problem to justify the need for their wise words of advice. But in this instance, ignore the opinion a-holes. They’re as full of hot air as a suicide volcano.

There is no epidemic. Sleep well tonight.