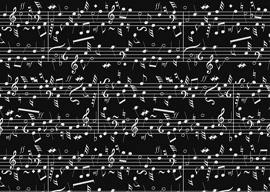 Your musical day should start with works written closest to our own time, then work backward. The reason is simple. Nineteenth-century music is filled with the forward momentum necessary for the mornings; whereas early music—similar to jazz—is based on an interplay of harmonies, giving it the astral quality needed for late-night contemplation. The reason for this is also simple. Early compositions sought to mirror divine relationships—the Music of the Spheres—with a view to serving the listener in the matter of worship or dancing. Later compositions tend to mirror the busy minds of their creators, with which the hapless listener must keep pace. As a result, they are temporal, not eternal. This is as true of the works of musical nationalism as it is of “La donna è mobile”; whereas the nonlinear relationships within early music mean its possibilities are open, infinite—and, in my book, nocturnal.

Let us then start your day at the end; with the acme of Romanticism, Beethoven. The slow movement of the Fifth Symphony will endow your waking breaths with something of his nation-building optimism. Kindly proving my above point, the time signature is andante con moto—walking with motion. Yet although its ambitions are noisy, the music is not. The same lightness is further distilled in works for smaller ensembles—of which the first movement of the Archduke Trio is the apotheosis of morning listening. Lighter still is the unfurling, chlorophyll-infused opening of the Spring Sonata.

My chaise-lounge-bound researches reveal that the sinewy modulations of a violin concerto are well suited to the onward section of the morning. Sibelius’ has an icy gymnasticism that is most refreshing, while Tchaikovsky’s stays just the right side of sentimentalism (the only absolute sanction is against the regressive schmaltz of Brahms’ offering; one of the few pieces of music we would be better off without). And then there is the beautiful arc of Beethoven’s; the last movement of which has a piratical swagger, which is a great tonic if planning to break the law later in the day. You will notice this morning menu crosses the peaks of the Romantic repertoire—yet contains no opera. Morning music—like morning drinking—is a means to an end: the day itself. Opera is too distracting and all-encompassing to serve this end; although we may make an exception for its instrumental passages. Here we can catalog some Wagner. The Tannhäuser overture will send you out the door as if fired by a circus cannon (if it were made by Krupp and pointed at Poland, that is). “Siegfried’s Funeral March” carries a similar risk: that unless you’ve repositioned your country’s borders by lunch, you’re going to feel like an underachiever. The same nourishing snarl is present in the opening of Mahler’s Second Symphony. By now a palate cleanser may be needed with your pre-lunch cocktail. For this you may turn to the final piece of classical music ever created: the last of Strauss’ Four Last Songs, fittingly entitled “Im Abendrot (At Sunset).”

“The appalling practice of playing music during dinner is an insult to both the food and the music.”

Following the thread of our reverse chronology, the early afternoon will deliver you into the more therapeutic arms of the 18th century. Here you will find the first indications of composer as servant, not master; the first sense of music as the mirror of an external logos, be it rationalist or divine. The late baroque is also the high point of oratorios, which—being multi-textured yet lacking the melodramatic distraction of opera—provide good centerpieces for an afternoon’s listening. Bach’s St. John or St. Matthew Passion, or his B-Minor Mass; Haydn’s Creation; and Handel’s late masterpieces Susanna and Theodora should all be at the front of the grid for your post-prandial détente (Theodora is also the sine qua non of 18th-century lasciviousness-masquerading-as-virtue, concerning as it does an eponymous Christian heroine to be sacrificed to the desires of a Roman barrack room. Anticipating this outcome, she sings some of Handel’s most beautiful music).

Should you need to work—some people do, apparently—high baroque offers a number of chunky catalog pieces for solo instrument suitable for “background” listening. Chief among these are Bach’s Well-Tempered Clavier, his Cello Suites, and his “French” Keyboard Suites (the “English” ones are, in defiance of their name, too noisy and complicated). Handel and Scarlatti are the other purveyors of fine afternoon keyboard repertoire. A word of warning: These pieces should be recorded on a modern concert grand. If you feel the urge toward harpsichord recordings, I suggest going the whole hog by popping a tangerine in your mouth and paying a Ukrainian dominatrix to go to work on you.

By this stage in the day, your work will be done and your spirit in repose. Your mind will be returning to the drinks cabinet, and to dinner. Now switch off the stereo. The IRS and Barack Obama were the main reasons I left the States; but the appalling practice of playing music during dinner was a close third. Doing so is an insult to both the food and the music (to be fair, the food often deserved it).

The evening has now passed. You are replete with food and wine, and the pleasing inwardness of night has descended. The climax of your communion with past ages begins as we pass the watershed of 1700; because the more life was brutish, ugly, and short, the more beautiful were its artistic outputs. Hence you come to the twilit madrigals of the uxoricidal prince Gesualdo; the grandiosity of Monteverdi’s Vespers, with its lapidary centerpiece “Duo Seraphim”; and Vivaldi’s evergreen reminder that “true peace is nowhere in the world,” which he transfigures into the most peaceful music imaginable. The link between these pieces is, of course, Venice; that melting pot of the Eastern Mediterranean, wherein the rich stock of Byzantine and Ottoman culture was reduced over the centuries. Using Venice as my pole, allow me briefly to vault you out of Europe altogether; to the northernmost reaches of the Ottoman Empire, where its rebellious gauleiter Dimitrie Cantemir codified the sounds of the Sublime Porte. In the same register—yet drawing on the region’s original Christian roots—you will find the startling work of French nun Soeur Marie Keyrouz.