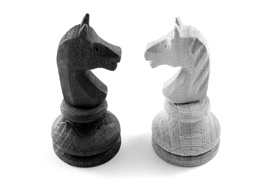 Seeing you’ve read this far, I’d better let you in on my secret. It’s called Lifemanship. Like all the best things, it is nearly impossible to define. It is an attitude that speaks to both our most gnawing existential impulses and to the interstices of everyday life. As such, it is a distant cousin of both Stoicism, which counsels a development of the Self, and of Epicureanism, which enjoins the practitioner to mine every moment for its hidden ores. Linking these extremities are darker currents: the Nietzschean will to power, and Machiavelli’s love of virtù. But do not mistake the latter for our bland, Episcopalian “virtue.” When the great Niccolò spoke of virtù, he meant the need to win—and be seen to win.

The original Lifeman tapped Rilke for his preferred definition: “If you are not one up, you are one down.” To this engine we might hook the carriage of our own Norman Mailer: “When two men pass in the street and say ‘Good morning,’ there is a winner and a loser.” Would that it were not so, but Lifemanship does indeed sink its pylons into an atavistic worldview that would make Hobbes blush. Like him, the Lifeman would accept that life is brutish and short. But ugly? Never. Unlike Hobbes, you see, he intends to do something about his condition.

“If Gamesmanship is a set of particular competitive tactics, then Lifemanship is the diffusion of those tactics into every aspect of life.”

The prophet of Lifemanship was—unfortunately, yet inevitably—a Brit. During a power cut in 1948, a man named Stephen Potter wrote a tract called Gamesmanship, or the Art of Winning Games Without Actually Cheating. Close observers of Britain will note the phrase contains all the elements of that island’s brief success. Gamesmanship means ensuring you’ve won before you’ve even stepped onto the pitch. It is the art of inserting such a deadly needle of doubt into your opponent’s psyche that he hemorrhages the advantage before even becoming aware of it. As such, it is arguably an admission not of strength but of weakness. And yet the Gamesman cloaks his weakness in such apparent strength that it goes unnoticed. If Gamesmanship is a set of particular competitive tactics, then Lifemanship—the title of Potter’s next treatise—is the diffusion of those tactics into every aspect of life.

It is time for an example. For this we will turn away from the drawing rooms and tennis courts of Britain’s “home” counties to the battlefields of Afghanistan. It was there that friendly warlord Ahmad Shah Massoud once took a wrong turn in his command vehicle. Having charged along for several kilometers in the dust storm, he came upon an encampment. Swinging down from the old 4×4 in expectation of a warm cup of tea and a warmer concubine, an awful realization broke: The faces around him were strange. He had driven straight into the camp of the other general, with no more than a carload of fighters to protect him.

Recognized immediately, what durst the Lion of Panjshir? Summoning both tea and his rival, he parlayed; feinting over distant valleys and spoils, playing off the clay-footed giants of the East and West, implying penalties and rewards to be had from the uneasy peace that beckoned. Like a waltz partner plucked from their chair, his opposite number’s mind was soon intricately ensconced. Their discussions concluded, Massoud got back into his jeep and swept out past the guards. Only then did the subtle odor of deception gather in the nostrils of the assembled Talibs, and they realized that they had been duped. Ladies and gentlemen: Lifemanship.

Castiglione would have called this sprezzatura (his Book of the Courtier is something of a Renaissance antecedent to Gamesmanship). To the more serious Russians, it would be a branch of their overall strategy of maskirovka—laying such a smokescreen of doubt that the opponent can trust nothing. To all but the most callow ingénue, the recent international parlor game of “fake” news is only the latest iteration of this time-honored gambit.