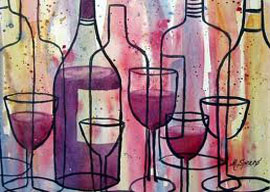 Yes, I”m a recovering alcoholic and haven”t touched a drop in some time, but whom would you choose to give advice on boozing”a water-drinker?

Let me deal with that class of sportsman for a starter. Who was history’s most notorious teetotaler? Adolf Hitler, that’s who. I believe he may have been a vegetarian to boot.

And who was the 20th century’s biggest boozer? None other than Winston Churchill, history’s greatest Englishman, without whom most of Europe (and I include the British Isles) would be speaking Kraut.

At home or on travel, at work or on holiday, Churchill drinks a glass of dry sherry at mid-morning and a small bottle of claret or burgundy at lunch. To Mr. Churchill a meal without wine is not a meal at all. When he is in England he sometimes takes port after lunch, and always after dinner. It is at this time that his conversation is most brilliant. In the late afternoon he calls for his first whisky and soda of the day….He likes a bottle of champagne at dinner. After the ritual of port, he sips the very finest Napoleon brandy. He may have a highball in the course of the evening.
“Fussell, Wartime, p. 98

Now, with whom would you prefer to have had dinner? Not only was Hitler a flat-out water-wagoneer, Trevor-Roper in his Hitler’s Table Talk reveals him to have been one of the most boring, balls-aching, conversational blowhards of all time.

May we get down to the business at hand, class? Real men drink martinis. Straight up. If you want to be like James Bond, you can order one that’s half gin, half vodka. It’s not bad, but the proper cocktail is gin, perhaps with a soupÃ§on of French vermouth, shaken, not stirred. The best gin is Plymouth’s, the Royal Navy’s official botanical. The Admiralty know what they”re doing. British sailors are entitled to a daily ration of rum, and the ward room is well stocked. On American warships, drink is officially against regulation.

Here’s the correct response to the offer of a twist of lemon or orange or an olive: “Thank you, but if I wanted a fruit punch, I would have ordered one.”

A note on the glass. If you”re a real professional, yours should not be one of those things that looks like a funnel and is depicted on a million American neon cocktail-lounge signs. It should be a small, say two-ounce, glass on a stem about half the size of a claret glass. Advanced drinkers go for a “pony,” half a size smaller again, which holds something more than an ounce. This is so you can have three or four martinis without getting pissed as a polecat.