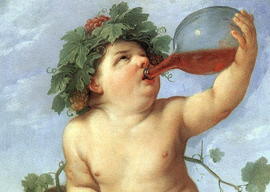 Now, class, you will remember in this symposium’s first installment that we dealt with the dry martini, the pink gin, and the bullshot, the proper cocktails which mark a gentleman (or lady, I suppose) as a person of breeding, class, and distinction.

I hope you”ll forgive the sexism, but frankly, men are generally better at piss-artistry than women. And when it comes to drinking, you”ll never know what is enough until you know what is too much. As Blake said, “The road of excess leads to the palace of wisdom.” If it’s worth doing, it’s worth overdoing. And overdoing it, with a case of the wobblies and the possible messy culmination of parking the tiger, calling Ralph”call it what you will”is not a dignified state of affairs for a lady.

In conjunction with this lecture’s academic character, I should like to draw attention to our scholarly conclave’s origin”the symposium. Plato gave us the symposium’s classical prototype. The Greek symposium was a booze-up. The word is derived from sympotein, meaning “to drink together.” There you have it: Western civilization was born in the haze of a drunken Greek debauch.

The relationship between culture and drink was nicely and succinctly put by William Faulkner: “Civilization begins with distillation.”

Now, I should like to deal with a couple of comments on Part I of this treatise. One reader asks if he might have come across me in Harare. I assume this is in reference to the African big-game hunter’s favorite tipple, the pink gin.

“Western civilization was born in the haze of a drunken Greek debauch.”

That we might have met in Rhodesia is possible. Before the troubles, I met a farmer there whose quarter-mile driveway had drainage ditches on both sides filled with empty Angostura bottles. When you consider that a man drinking daily would have difficulty putting away a bottle a month, that’s a lot of pink gins.

After embargos were introduced, the Rhodesians made their own “Angus Stewart” bitters. The Ugandans, ranked as the world’s leading per-capita alcohol consumers, make a gin from bananas called waragi. So the Dark Continent has contributed its own ethereal stars to the spacious alcoholic firmament on high.