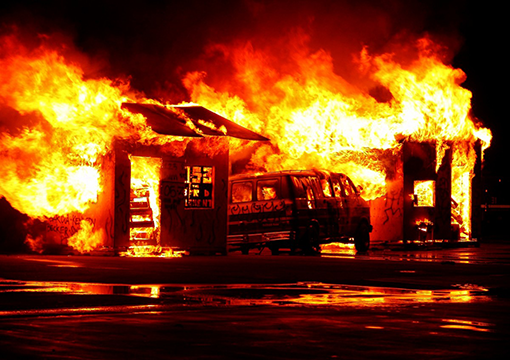 Giving credence to suspicions that rioting has engulfed the nation for four months now without officials lifting a pinkie finger to stop it because it’s actually part of a Deep State operation to rebuild the nation the way they want it rebuilt, the FBI recently took pains to announce that, no, Antifa was definitively NOT responsible for a spate of Oregon wildfires.

Giving credence to suspicions that the mainstream press is merely a PR arm of the Deep State, many high-profile publications have taken great pains to assure us that, no, it hasn’t been Antifa and BLM torching and smashing and beating and killing since late May—it’s been “white supremacists” all along.

They even want us to know that when rioters and their enablers chant or tweet “burn it down,” they don’t actually mean it literally. Or at least not all the time.

‘Burn it all down’ isn’t always a genuine recommendation. Sometimes it’s just an expression of extreme frustration, recognition that something is so deeply flawed that gradual incremental change within existing infrastructure won’t cut it. It’s a provocation and a challenge to imagine how, if you had a blank slate, you’d go about solving big problems in creative, radical ways. It’s also a kind of self-care, an anti-gaslighting technique that allows space to acknowledge how bad and hurtful something is before we begin the long, hard, painful work of making it better.

Gaslighting? Zuckerberg, please! What are they extremely frustrated about? The fact that in very rare cases, violent black suspects with long criminal histories get shot when they’re dumb enough to resist arrest and assault police?

“Have you noticed that not one of the tools who chant ‘burn it down’ has proposed what they plan to do after the only thing left is ashes?”

Sounds kind of juvenile and mental. For years, psychiatrists have linked arson with mental illness. And it’s also a common behavior among fledgling serial killers. The other day I honestly asked online if the next trend would be torturing animals in the name of social justice and was informed that it’s already happened.

A Louisville TV station recently quoted John Jay Johnson, leader of a black militia group called the Not Fucking Around Coalition, about what he meant back in July when he said this about Breonna Taylor—a woman who was accidentally shot by police after her dope-slinging boyfriend shot at police first—meant when he said this back in July:

If we … don’t get the truth … the whole truth … and the motherfucking truth, we are going to burn this motherfucker down.

The truth? When did these flagrantly inarticulate imbeciles give a fig about the truth? Johnson’s response:

That’s a million-dollar question. Nobody with good sense would think you would come in like the old days with torches and burn the town down. That doesn’t serve the purpose. ‘Burn it down’ means to take down the systems that are in place that have held us up. In other words, we need those answers and we need those answers now. No one has issued a threat to burn down the town. We don’t break the law.

Well, it seems as if at least a few hundred of your allies didn’t get the memo, sir. And your jibber-jabber about “racism” rings hollow when one of your own members showed up in Stone Mountain, GA challenging “crackers” to a gun battle.

It’s interesting that Johnson said “the systems” have “held us up” rather than “kept us down.” Maybe he meant “impeded us,” but whether he actually meant that the American judicial system is either holding blacks down or impeding them from realizing their full potential, he is welcome to address my perennial challenge to name a black-majority place on this godforsaken planet where his brethren fare better than they do in America.

The endless calls for arson, real and imagined, literal and figurative, continued apace last week. When it was announced that a grand jury had reviewed all available evidence and concluded that the only law police broke during the Breonna Taylor incident involved shooting recklessly into adjoining apartments, rioters shot up two cops and Twitter allowed #BurnLouisville to become a top trending topic because apparently that’s not a terroristic threat.

When Ruth Bader Ginsburg died far too late last week and it was suggested that Donald Trump might nominate a replacement as is his right, foreign-born writer Reza Aslan tweeted thusly:

If they even TRY to replace RBG we burn the entire fucking thing down.

He later clarified that he was not speaking figuratively and that if Mitch McConnell proposed a vote for a nominee, Aslan was calling for a violent insurrection—which, last time I checked, is a federal crime:

Over our dead bodies, literally.

Has this insufferably self-righteous twat ever been in a fight? I mean, a literal one instead of some online slapfest?

By the way, have you noticed that not one of the tools who chant “burn it down” has proposed what they plan to do after the only thing left is ashes?

A generation that has never done anything besides watch Star Wars movies and swipe right on Tinder somehow seems convinced they can rebuild a better civilization from scratch.

Why should we trust people who can’t even spell the word “breathe” to rebuild a more functional society than the current one?

How do you expect them to build a functional civilization if their entire protest movement is based on the provable lies that police are wantonly slaying blacks in the streets and that blacks are in any way systematically defamed and oppressed rather than worshiped and enabled? If they can’t even get THAT straight, they can’t get anything straight.

Let’s say that hypothetically, America falls apart and a Civil War ensues. In the case that the USA no longer exists and the side that is more sympathetic to my beliefs winds up victorious, I offer an alternate proposal: Anyone who is dumb enough to think they’ll improve society by burning every institution and edifice to the ground should be neutered in every way possible: financially, socially, and yes, even sexually. Burn every last opportunity in life for them down to ashes. Cut their legs off at the knees and send them out to sea on ice floes as they slowly bleed to death.

Better yet, burn them at the stake. It’d be more poetic.

The world would be a far better place without any of these destructive waste cases. These people are the reason we can’t have nice things, the losers who want to topple everything because they’ve personally achieved nothing.

In my eyes, any medium-sized house with a solid foundation and no black mold is worth more than any of their lives.