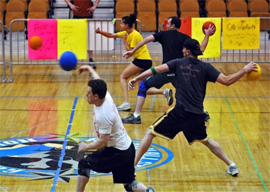 Generation Y grew up in a bubble of PC feel-goodery that cushioned them from the monster of reality. As a member of Gen Y, I received first-hand experience with this bubble. It gave us a participation award when we sucked at sports. When we were fat, it told us we were big-boned. When we were sad, we had depression—manic depression when we were moody. It even invented ADHD when we wouldn’t pay attention. And more members of Gen Y have taken Xanax than have been snowboarding because, to us, the unknown is scarier than hurling down a mountain.

Now we’re told we will never be tough because we never had to battle for anything. They may be right. I have it on good authority that Glee, the Gen Y bubble’s last stand, even suggests dodgeball is a form of bullying.

But in this wussiness we find our own battle. It’s not a battle to defeat a real enemy; it’s a battle to get in touch with reality.

My generation needs to fight to realize we’re not born special. We’re born a crying, pooping, helpless mess—nothing special about that. If we want to be special, then we need to make ourselves special. Even then you’re not that special, and the effort usually isn’t worth it.