Bury My Heart at Wounded Negro 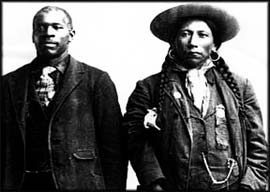 On Monday, the Cherokee Nation Supreme Court upheld a voter-approved constitutional amendment that revoked tribal membership for the so-called Cherokee Freedmen, the modern descendants of black slaves whom Cherokee tribesmen had owned prior to the Civil War. The 16-page ruling argued that the Cherokee, and only the Cherokee, had a right to define exactly who is a Cherokee.

The ruling was handed down in the tiny town of Tahlequah, OK. It came exactly 150 years and a day after the Cherokee Nation formally allied themselves with the Confederacy in the Civil War in a declaration that, as fate would have it, was also signed in teeny-weeny Tahlequah.

Most Americans these days probably don’t know that several “Native American” tribes allied with the Confederacy during the Civil War. Then again, most of them probably aren’t aware that Injuns also owned slaves, even before Paleface’s ivory-colored toes landed on America’s shores. Most of them also aren’t likely to know that thousands of black freedmen also owned slaves in antebellum America. To be blunt, most Americans these days don’t know much of anything besides what they’re spoon-fed from the boob tube.

“To be blunt, most Americans these days don’t know much of anything besides what they’re spoon-fed on the boob tube.”

It’s nearly impossible to conceive that anyone would choose to live in Oklahoma on purpose. Accordingly, the Cherokee arrived in that flat, dusty, brownish plain of misery at gunpoint in the 1830s after being driven from the East Coast along the notorious “Trail of Tears.” Slave-owning Cherokees brought their black servants along with them, in many cases forcing them to carry their luggage.

The Cherokee—members of what are known as the “Five Civilized Tribes,” a term that seems, quite frankly, like a slap in the face to all the other tribes—held an estimated 4,600 black slaves in 1860, more than any other tribe in the Indian Territory. Monday’s ruling came as a slap in the face to the estimated 2,800 “non-Indian” Afro-American Cherokee Freedmen who previously had been entitled to free healthcare and educational benefits as a result of their conceptual, rather than genetic, membership in the Cherokee tribe.

“This is racism and apartheid in the 21st century,” wailed Marilyn Vann, president of the Descendants of the Freedmen of the Five Civilized Tribes, who are attempting to Sioux sue the Cherokee Nation for what cynics might view as an egregious act of Indian-giving. “This is a continuation of our Trail of Tears as we fight for our rights,” Vann said in a fit of hyperbole. Her organization has planned an emergency meeting at 2PM on Saturday to discuss strategies for overturning the recent ruling. Vann has invited “anybody who is interested in civil rights and the law” to attend the meeting at the Martin Luther King Center in Muskogee, OK, a town which Merle Haggard famously sang he was proud to be from but was actually lying since he was from California.