But Is It Good for the Gays? 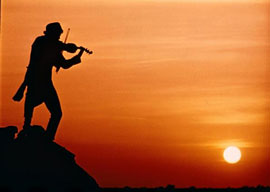 As Enoch Powell noted, “The supreme function of statesmanship is to provide against preventable evils.” This year’s dangerous imbroglio between Russia and the United States”a conflict I labeled “World War G“ last August  after reading yet another series in the New York Times denouncing Russia for putting an R-rating on gay propaganda”was eminently foreseeable. But few in America could see it coming because of the long clampdown on discussing the prejudices of the powerful.

There’s inevitable bad blood between Russians, for whom pro-czarism is the natural political inclination (for reasons of geography and history, Russia is a backward place, so its political traditions are backward), and American Jews, whose ancestral traditions are fervently anti-czarist.

Thus, Putin’s reconstruction of a functioning Russian state after the disasters of the 1990s was inevitably going to turn out to be more or less neo-czarist. In turn, a strong Russia predictably triggered anti-pogrom alarms among American Jews. Since there aren”t actual pogroms, much of Jewish animus and angst got displaced into its 21st century proxies: neoconservatism (as in the case of the State Department’s Victoria Nuland) and gay activism (Radio Liberty’s Masha Gessen).

“Both Russians and American Jews have perfectly understandable reasons for feeling the way they do. Fortunately, this psychological disjunction needn”t lead to war or even to simple jingoism.”

Both Russians and American Jews have perfectly understandable reasons for feeling the way they do. Fortunately, this psychological disjunction needn”t lead to war or even to simple jingoism. After all, we live on different continents. Both sides ought to be able to recognize and laugh off their inevitable bigotry and malice.

The central cognitive problem for America, however, is that gentile Americans aren”t allowed to notice, much less laugh at, Jewish predilections, nor even mention the level of Jewish influence in the American media and government (e.g., Gregg Easterbrook and Rick Sanchez).

Fortunately, our mental crimestop defenses don”t get activated when trying to comprehend the traditional geopolitical paranoia that underlies Russia’s taste for autocracy.

Czarism, which is Russian for Caesarism, is not the default political system of humanity. The Roman Republic rose to dominance through a complex, evolving system of power sharing until Julius Caesar’s conquest of Gaul seemed to make imperial dictatorship advisable through sheer scale.

The Russians came relatively late to the concept of Caesarism, only espousing it after shaking off two centuries of the Tartar yoke of the Mongols. The oriental despotism introduced by the Mongols impressed the Russians, who converted it into czarist absolutism in which the Czar’s role was vindicated as the disinterested protector of the common people from grasping elites. The imperialist Ivan III, Grand Prince of Moscow, began to regularly call himself Czar late in the 15th Century as his conquests spread far beyond Muscovy.

The Russians have since felt that while they may not have all that much going for them in terms of access to the ocean or other geographical and economic advantages, they at least stick together and follow orders. As long as they don”t fragment, another Genghis Khan can”t conquer them.

Note that czarism is a recurrent tendency in Washington whenever things aren”t going well. At least since William Simon was appointed Energy Czar in the 1970s, Presidents have announced they were going to appoint a Czar of this or that with absolute authority to cut through the politics and get things done. (Obama was going to make Tom Daschle the Health Czar, while Bush kicked around the idea of having a War Czar.) Czarism is a pretty un-American and stupid idea, but if, with all our advantages, we”re suckers for it, you can grasp why the poor Russians are addicted to strongman rule.

As Russia expanded westward in the 18th century, it came to rule over the parts of Poland and Ukraine long inhabited by Jews, invited in by Polish nobles to replace the urban middle class that had been slaughtered by the Mongols. (In contrast to the Poles, the czars had long preferred Germans and Dutch as bearers of superior Western organizational techniques.) The czars manifested an unfriendly attitude toward Jews, whose economic status declined as their population expanded much faster than the number of white collar jobs.

The assassination of the reformist Czar Alexander II in 1881 led to anti-Semitic mob pogroms in Ukraine and Poland, which worsened in 1903-1905 with the Kishinev massacre in what’s now Moldova. This tragedy was made notorious in America by William Randolph Hearst following up his successes in Cuba.