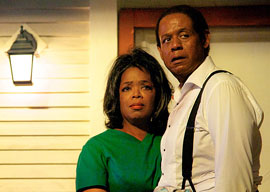 The hit movie Lee Daniels’ The Butler, staring Forest Whitaker and Oprah Winfrey, takes us back to the bad old days when blacks worked in the White House rather than lived there.

Strange as it may seem now, in an America where Hispanics and Filipinos fill ever more of America’s servile jobs, African Americans were once employed across the land in vast numbers as trusted domestic servants. With the coming of the Black Pride movement in the late 1960s, however, blacks began to see service work as neo-slavery and an insult to their dignity.

Meanwhile, well-to-do whites, alarmed by the rising rates of crime and surliness among blacks, were happy to be handed a politically correct excuse to stop hiring uppity African Americans and replace them with whites or more docile and less threatening immigrants who sometimes happened to be black, albeit West Indian or African.

As recently as 1980, blacks were a solid majority of the caddies on the golf tour. As it came to seem shameful for a black man to carry a white man’s golf bag, by 2000 the black share was down to a few percent. As caddying became a six-figure job, white golfers were happy to stop oppressing blacks and replace them with family members or fraternity buddies.

Similarly, a large fraction of the tiny number of black waiters left today appear to be gay, which is not true of Mexican waiters, who don’t seem to see much threat to their manhood in providing service with a smile.

Unfortunately for blacks, it hasn’t turned out that there are all that many better jobs out there for them. While a few black men get to be gangsta rappers, many wind up dealing drugs and going to prison. This has proven a popular, stable system: Blacks get to act tough and whites get to not hire them.

This ironic history made Lee Daniels’ The Butler sound like a promising film. It fictionalizes the life of Eugene Allen, a black farm boy who worked his way up at the White House from the pantry under Truman to head butler under Carter and Reagan.

“When it comes to race, liberals are ever more living in the past.”

(Daniels is the manic black impresario behind another awkwardly titled movie, 2009’s Oscar-winning Precious: Based on the Novel “Push” by Sapphire.)

The highest-ranking domestic servant in the US is arguably the White House’s maÃ®tre d’ or head butler. Allen was such a distinguished example that when he announced his retirement in 1986, Nancy and Ronald Reagan invited Mr. and Mrs. Allen to be their guests at a state dinner for the West German chancellor.

Although lacking in drama, Allen’s life was a pleasant tale of old-fashioned black upward mobility that offered an opportunity for reassessing the turn black culture has taken. The flamboyantly homosexual Daniels, a frequent loose cannon, is less a fan of the modern minstrel show of black machismo than are most show-biz types, so it didn’t seem too much to hope that he’d cast a doubtful eye on the conventional wisdom.

His Precious, a scalding portrait of black underclass dysfunction that no white filmmaker would have dared release, benefited from an Oscar-winning screenplay by Geoffrey Fletcher, a scion of an upper-class black family.

Unfortunately, The Butler is sunk by a downright stupid script by Danny Strong, a white writer of conventional liberal cluelessness. (Strong won an Emmy for his HBO movie on Sarah Palin, Game Change. He recently signed to write the last two movies of The Hunger Games, which will likely deep-six the potential of that so-far inept but intriguing series to be anything more than MSNBC tedium.)

When it comes to race, liberals are ever more living in the past”as seen in recent fiascos such as Trayvon, the Oberlin KKK blanket, and Marco McMillian. That’s because whipping up fear and loathing of white conservatives is the only thing that keeps the diverse Obama coalition from splintering into ethnic camps warring over spoils.

As the white Baby Boom ages and loses interest in everything except party politics, American culture gets more stultified in its insistence on milking the past for partisan advantage. These days, whites such as Strong shouldn’t write about blacks. Leave that to black writers, who are permitted to tell more truth.

Not surprisingly, The Butler, despite being clunky, is a hit that will likely get Academy Award attention and be played in high-school classrooms whenever teachers can’t stand their students. Already, A. O. Scott of The New York Times, who ought to know better, has embarrassed himself by deeming it “a brilliantly truthful movie.” (As we saw with the Martin/Zimmerman travesty, white liberals tend to respond to their mistakes in judgment on race by doubling down.)

It was inevitable that much of Allen’s placid life had to be fictionalized, but Strong’s eye-rollingly clichÃ©d inventions suggest much about what the public wants in a pious quasi-historical mishmash about the Civil Rights era: a sort of Ken Burns’s Django Unchained.

Although Allen told the Washington Post that he had enjoyed a happy childhood in Virginia, the film opens with a scene of violence implausible enough to give even Quentin Tarantino pause. The movie opens with a nine-year-old future butler watching the cotton-plantation scion raping his mom (Mariah Carey, in the first of many instances of random casting of Daniels’s celebrity friends), then shooting his father dead in front of dozens of black witnesses.

This is a wholly made-up scene, but it’s the kind that everybody nowadays believes must have been a fixture of daily life in the Jim Crow South. Yet as historian Eugene Genovese explained in Roll, Jordan, Roll, even in slavery days, modern fantasies of plantation owners possessing Caligula-like power weren’t true. Slaves as well as 1920s sharecroppers were frequently armed with hunting rifles and had ready access to axes and scythes. Plantations are large places, and tragic accidents tended to befall white masters who raped black women or shot their husbands.

But the KKKrazy Glue of the Obama Coalition is its unquestioning belief in murderous white Southerners’ ubiquity.

The rapist’s grandmother, Vanessa Redgrave (and why not?), immediately hires the little orphan to be a house servant, presumably so he can more conveniently put rat poison in their mint juleps.