By Dynamite or Design 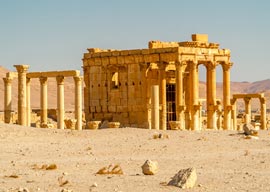 The trouble with vandalism is that it is fun, especially for people of modest accomplishment. The urge to destroy, said Bakunin, Marx’s anarchist contemporary, is also a constructive urge, thus demonstrating remarkable obtuseness about the human heart. Destruction brings a sense of relief, albeit temporary, to the frustrated, to whose ears the sound of smashing objects and tinkling glass is sweet music. When aspiration comes, can resentment, and therefore vandalism, be far behind?

Where vandalism is allied to a deep sense of purpose, however stupid or evil that purpose may be, and also a desire for publicity, it is only natural that it should be directed at the most valuable objects within reach. The destruction of Palmyra against the wishes of the rest of the world must have given the barbarians who did it (some of whom probably came from Britain and France) an intoxicating sense of power. When finally ISIS is defeated, as one day it will be, its militants will look back with pride on its greatest achievement: the destruction of mankind’s heritage.

I noticed that Richard Dawkins, the biologist”turned”Savonarola of atheism, tweeted that the destruction of Palmyra demonstrated the power of religion: the doleful power, of course. It seemed to have escaped his notice that temples are generally built in the first place from a religious impulse, and that Palmyra had survived for two millennia in a region to which religion was by no means entirely unknown.

“To contemplate the stupidity or barbarism of others is always gratifying, of course”so gratifying that it should warn us to turn our gaze inward and consider ourselves.”

No one could possibly deny that religious fervor and intolerance have often been destructive, though it may be doubted how far such episodes as Henry VIII’s dissolution of the monasteries, with all its associated physical destruction, was motivated by genuine religiosity. You would not have to be Marxist to suspect other motives.

Moreover, such destructiveness is not confined to the fanatically religious, at least not unless you redefine religion to include fervent secular political beliefs held with absolute assurance of their transcendent truth. The greatest outburst of cultural vandalism in recent history was probably Mao’s Cultural Revolution, which, as the late and great Belgian sinologist Simon Leys pointed out, had nothing cultural or revolutionary about it”nor anything religious, either.

The Islamic destroyers of Palmyra apparently believe, or affect to believe, that all that belongs to the pre-Islamic era is a manifestation of jahiliyya, or ignorance, and therefore worthless”indeed harmful, insofar as respect for it implies a deviation from the path of religious purity. This point of view is hardly worth arguing with; you might as well argue with a madman who believes that he is Napoleon.

To contemplate the stupidity or barbarism of others is always gratifying, of course”so gratifying that it should warn us to turn our gaze inward and consider ourselves. And what we discover when we do is less than reassuring. It is not necessary to dynamite to destroy.

A few months ago, I was walking toward the Tate Modern Gallery in London. I got a little lost, and walked down a street not directly on my path. There I happened upon a little building of the first half of the 18th century, not an architectural masterpiece by any means (as it was never meant to be), but charming and graceful, of human scale but not entirely without grandeur, well-mannered, one might almost say.

Immediately behind it, however, had been built a huge modern office block obviously inspired in style by the Centre Pompidou in Paris, though with bright yellow rather than red as the deliberately garish color. It completely overwhelmed its neighbor, as if setting out deliberately to humiliate it, to demonstrate to every passerby how much progress we have made in our power and structural engineering”to demonstrate that builders in the 18th century lived in the architectural equivalent of jahiliyya. Thought had obviously been given to the question of compatibility of the two buildings, and the decision taken to make the new building as incompatible as possible, to make a virtue of such incompatibility, in fact.