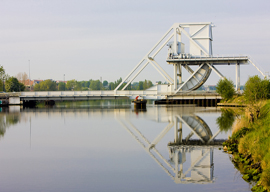 PEGASUS BRIDGE, NORMANDY—We’re taking morning coffee at the Gondree Café (skirting “THE” bridge), still owned by Arlette Gondree, whose family owned it on D-day. She was a girl at the time, and she now stands old but erect and schoolteacher-like, looking us over as we have breakfast and try to imagine the brave Brits who took and held the bridge so long ago. Our führer/teacher James Holland called it the greatest piece of flying ever, when the gliders managed to land in the dark on a grassy strip not much wider than a tennis court and three courts long, not even fifty yards from the bridge. (The very same pilots had messed up in Sicily one year before, but this time they got it more than right.)

What every Allied commander feared was the ten armored divisions of the Panzergruppe West, commanded by General Geyr von Schweppenburg, with their 170,000 men and 1,500 tanks. Schweppenburg was a gallant commander who knew that by keeping his army inland he could mount a massive counterattack and wipe out the Allies. The taking of the bridge by Major John Howard and his 6th Airborne commandos was imperative. It was the sole passage from east to west and would allow the invading forces to join them a few hours later. We move to the Gold and Sword Beaches, assigned to the Brits as revenge for the Dunkirk and Dieppe humiliation of four years earlier. I look over Lord Lovat’s bust, a ramrod-straight man I saw once at his son’s wedding, where I had been an usher. We arrive at a small farm where a young boy had told Company Sergeant Major Hollis that Germans with a Panzerfaust were hiding behind a hedge fifty meters away. Hollis attacked it with three men but failed to move it. He retired but was awarded the first Victoria Cross nonetheless for having attacked and taken out the first bunker blockhouse on the beach earlier. (The bunker had taken out six British tanks, but Hollis of the Essex Yeomanry blew it up single-handedly.) As James finishes the story, we see a very old man tending the garden. He’s most likely the little boy who signaled Hollis.

“Men don’t fight for ideas, they fight for their company, their squad, their buddy.”

James’ theory against the one that tells us the Allies advanced much too slowly is that democracies do not force men to advance at gunpoint, dictatorships do. I’m not so sure. Men don’t fight for ideas, they fight for their company, their squad, their buddy. People nowadays worry about self-help bromides, their insecurities, sensitivities, their shopping. They worry about their encroaching mortality. Not so on the front line. Like an athlete, you don’t think—you follow orders and look out for the next man. The sense of camaraderie is all.

That evening, fired up after the battle images, we order some very good wine. A wonderful and very humorous friend, John Moore, orders a 65-minute egg, which arrives after 65 minutes and is microscopic. While waiting I notice our waitress, not a particularly pretty girl but pure and innocent-looking, my type, with prominent glasses. I am stricken and ask her to dine with me the next day. She blushes—a blush in 2018 is as rare as a real Fabergé in an Arab souk—and tells me it’s impossible because she’s engaged and is to be married next week. This drives me mad with desire and I insist. She resists. “Don’t be so middle-class,” I advise her. Then I sort of blow it by reminding her that if the French army had resisted like her in 1940, we wouldn’t all be here in the first place. Having told her I have German blood and am married to a German doesn’t help, but I get some encouragement from the concierge, who—Iago-like—whispers to me to keep trying. “Margo, Margo,” I howl into the night like some lovelorn werewolf.

On Tilly Point 103, in Bayeux, twelve SS Hitlerjugend Division tanks finally engage the Allies. Panzer Lehr has come up from Le Mans posthaste to join the fight. Tank warfare is not like in the movies. Tanks are death traps; they operate in total darkness. The fumes are suffocating, and molten bits of metal hurl against one another, the kinetic energy blowing up tanks full of men, who are then scraped out in tiny bits, nothing resembling a human being left inside. No human can take more than four days of tank fighting.

The battle rages back and forth; the great German tank commander Michael Wittmann—230 Allied tanks—is killed, 17-year-old paratroopers without any training are walking up from Le Mans, and Wehrmacht lieutenant general Lüttwitz receives a message from an American commander that he has captured German nurses and is willing to send them over. Lüttwitz rings up Rommel, who tells him to accept the nurses and thank the Americans, as “I will most likely throw in the towel because Berlin is lying and sending us nothing,” or words to that effect. Lüttwitz tells the Swabian that he will follow him, whatever he decides. The next day, Rommel is machine-gunned from the air as he’s traveling in an open car with his marshal’s insignia for all to see. (Historian David Irving sent me a message about last week’s column saying that Hitler was absolutely certain that the invasion would be in Normandy, and that the German generals changed their tune after the war.) We visit the cemeteries and our mood gets very dark.