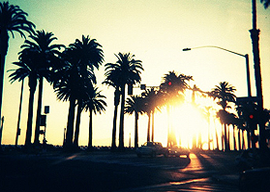 In February, fresh from the great victory at Oxford, I went to a dinner party in London. At one point my historian friend asked: “Don”t you miss Europe?” My response was a halting “Ye-e-e-e-s-s-s, but…” It is difficult to explain to a European. For all that annoys or disgusts me here, there is also a deep fascination with the self-licking ice-cream cone that is California.

Ah, California! Perhaps no other of the United States has such a diversity of landscape”mountains, deserts, beaches, forests, and everything else imaginable, save tundra. One could go on forever about our natural resources. Industry? We have it! The entertainment industry is our most famous, but we have plenty of others. All of this has led to the old saw that were we a separate nation, we would be the world’s eighth largest economy”and this despite our near bankruptcy!

A late autumn afternoon in Los Angeles with an impossibly rich blue sky and a mellow golden glow may not be as beautiful as New England’s foliage, but amid the faux architectural styles of interwar construction it lends a dreamy sepia tone to everything as though you were in someone else’s memory. Combine this with some of our otherworldly scenery such as the much-filmed Vasquez Rocks. That dreaminess goes a long way to explain both the movie business turning the Golden State into a stronghold of fantasy and innumerable strange cults creating a shrine to the bizarre. This general tone has also had its effect on the waves of people who have come here”the strangeness attracts many and transforms others. But each wave has also transformed California”often out of all recognition to what was here before.

“For all that annoys or disgusts me here, there is also a deep fascination with the self-licking ice-cream cone that is California.”

First to come were the Indians. (Only politicos, academics, and media drones feel comfortable saying “Native Americans””do NOT try saying that in a reservation bar!) Down here in the Southland, with its incredible aridity (and no one named Mulholland to build aqueducts and steal water from the Owens Valley for them), the locals could only live where there were sufficient oak trees to provide acorns and cover for hunting rabbits. It was primarily broken and defeated peoples that were driven here from pleasanter places. As a result, California’s pre-discovery linguistic map was a crazy quilt; ethnic diversity and conflict was a leitmotif here from the beginning. Affected by the odd scenery and the ever-present threat of hunger, the local Indians established yet another pattern for their successors to follow. The jimson weed cult was their religion, proving that hallucinogens and weird belief systems have been here for centuries.

This dippy paradise was not to last. In 1769, our royal founder, Charles III of Spain, was afraid that the Russians would swoop down from Alaska, annex the then-unsettled Alta California, and menace New Spain. He dispatched (and funded) an expedition to evangelize and claim California, headed by the saintly Franciscan Friar JunÃ­pero Serra. By the time Mexico forced California into independence from Spain in 1822, the Spanish had built up a rather impressive infrastructure: 21 missions stretching from San Diego to the Bay Area; four presidios; two civilian pueblos; a network of ranchos, and, running like a vertical spine through most of the land and tying us to our sister colony of Baja California, El Camino Real “the King’s Highway.