Call Me Ishmael: The Hunt for White Supremacists 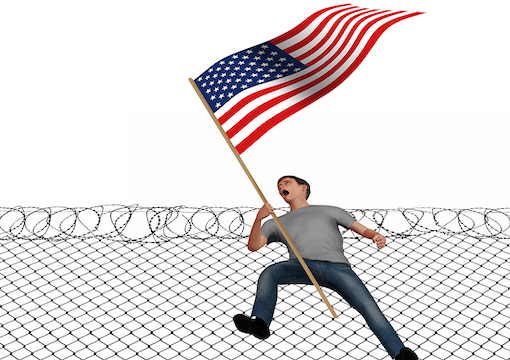 You want to write a piece about the threat from white supremacists, remembering that Attorney General Merrick Garland told Congress that violence incited by white supremacists poses “the most dangerous threat to our democracy.” Homeland Security Secretary Alejandro Mayorkas agreed. According to Biden administration officials, the threat is greater than from any foreign nation, including—and this is frightening—Donald Trump’s longstanding co-conspirator, Russia!

So you go to Google and type in “The Oath Keepers” because you’ve discovered it is one of the three major white supremacist groups in the country. Nothing comes up.

So you click on the second page of the Google search even though you know—because, well, you’re quite sophisticated—that the percentage of searchers who bother to click the second search page is in the single digits, and you’ve heard the joke that the second page of a search is the best place to hide a dead body.

But you don’t find “The Oath Keepers” on the second page, either. Neither do you find it on the third page, a land where few people have ever ventured.

Finally, but with some trepidation (because you don’t like dark, damp places that might teem with snakes, bugs, and confidants of Hillary Clinton), you go to the fourth page. There you find a relaxed Jimmy Hoffa, not the least concerned about being apprehended, and, also, finally, “https://oathkeepers.org,” the URL for The Oath Keepers.

However, when you search for “The Oath Keepers” on DuckDuckGo, it’s the first entry that comes up on the first page. Finally, you can start investigating this most dangerous organization.

The first tab is the “Home” section. That’s where you might expect to find the most important message, knowing—and knowing that the Oath Keepers probably know too—that many people won’t bother to click below it.

And on that first tab you find The Oath Keepers’ most important message:

MAKE A COMMIE CRY!—JOIN OATH KEEPERS!
Due to all the malicious leftist attacks, our ability to take new memberships online is temporarily interrupted, but if you want to join Oath Keepers, you can mail in your application and dues. Mail to…

That’s it. That’s the No. 1 message of one of the most dangerous groups in America: Send money. (NB: Don’t fail to admire the subtle dig at America’s professoriat: “Make a Commie Cry.” These white supremacists sure know how to stick it in.)

“According to Biden administration officials, the threat is greater than from any foreign nation, including Donald Trump’s longstanding co-conspirator, Russia!”

You figure there just has to be more to an organization that has attracted so much attention, so you click on the third box, “About” (the second one is “Log In”). The text begins: “Oath Keepers is a non-partisan association of current and formerly serving military, police, and first responders, who pledge to fulfill the oath all military and police take to ‘defend the Constitution against all enemies, foreign and domestic.’ That oath, mandated by Article VI of the Constitution itself, is to the Constitution, not to the politicians….”

That message doesn’t exactly tell you where and when to plant the bombs and light the fuses, but you can understand why the pols and the Deep State bureaucrats don’t like it: They want you to obey them. As in: Get vaccinated. And keep your hands off the hydroxychloroquine.

The next box down is “Donate.” Again? You don’t want to be told again to give; you want to know at what wee hour of the morning and under which bridge to assemble. And how much…stuff to bring along. Maybe that will be revealed in the next conspiratorial box down, cleverly camouflaged as “News.”

Nope. It has only clippings, tweets, and a few short videos. Where are they hiding “The Plan”?

Probably in the next box, “The Gear Store.” That has to be it, because when you click on it your browser tells you: “This site can’t provide a secure connection. oathkeepersgearstore.com sent an invalid response.” I wonder why! These guys are clever!

The last box is “Contact Us,” but it seemed to require logging in first, perhaps by using a secret password and a special hand gesture signaling you’re okay. It must be for members only.

That’s it. That’s all the info you get on one of the most dangerous threats to our democracy.

We had expected to find racist, antiblack rantings as well as antiblack policy positions on the site—it is a white supremacist organization, after all—something like:

With our fellow white supremacist organizations, Proud Boys, the Three Percenters, and the Texas Freedom Force, we enthusiastically support:

A $27 minimum wage
Open borders, and
An end to charter schools, and particularly the DC Opportunity Scholarship Program.

You can’t get more racist and antiblack than that, policy-wise. But there wasn’t a hint of those positions, at least not on the pages that a stranger can visit. These fellows are crafty (it’s rumored they’ve tapped directly into the White House policy shop), and they are clearly dangerous. So you can understand why Attorney General Merrick Garland and the other gumshoes in FedLand are scared witless of them.

But you can sleep easy now because we’re onto them. And we’re watching them—from a supersecret location (shhh): a rented room in Roger Stone’s new house located on the fifth page of a Google search, where few have ever been, where Robert Mueller and his CNN goons will never find him again, and I only am escaped alone to tell thee.