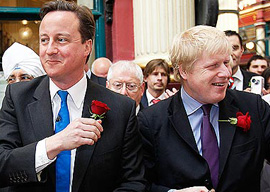 Once upon a time at a famous school in La-La Land, Cammy Cam and Boris Bunter were sitting under an oak tree plaiting yellow ribbons and scoffing buns.

Cam looked despairingly at his fat friend. He was so out of touch with the people’s needs.

“I mean you and me and the rest of our pals and everyone else in the country. We will all be in it together.”

From over by the river Ozzie was approaching. He looked cynical and glum.

“”Cam has invented a fab new game called Big Society and he is just explaining the rules,” said Boris.”

Cam was on a roll.

“We will give communities the right to take over local state-run services, we will train a new generation of community organizers, we will support the creation of neighborhood groups, and we will never surrender.”

A crowd was gathering.

Around them things were getting out of hand as more and more people flocked to join the mob.