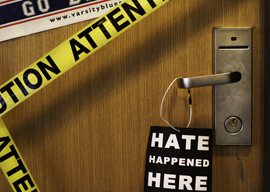 Recently at a local college whose name I will not divulge, an act of “racial vandalism” occurred which the administration is naturally investigating. The college newspaper has devoted considerable front-page coverage to this “vandalism,” quoting certain students who demand that the school rectify it immediately. It seems that on February 11, some wiseacre posted a note for a campus black-advocacy group. According to the featured story, the group “had been enriching the academic community throughout the month with posters proclaiming the good deeds and achievements by minorities through the year in honor of Black History Month.” The offending vandal chose to strike on a black liturgical holy day honoring historical inventor Jan Ernst Matzeliger. (From the name it would seem that whomever this Jan was, he had lots of Kraut genes.)

The student posted an anonymous note including a shockingly abusive fact. Matzeliger, it seems, was being honored on Thomas Edison’s birthday. The note implied it might be inappropriate to lavish attention on Matzeliger while ignoring a much more famous American inventor simply because they were a “white person.” The college at which this malignant enormity occurred has created a dragnet which will be in force until the hate criminal is apprehended. Apparently some female students are posting entries on Facebook indicating their shock about being forced to live in a toxically racist environment. Is this college really the best place for them to spend their parents” money?

One tender young thing has gone into truly high gear and announced that “we will not ignore the bigotry that seems to keep the lines of equality broken.” These arbitrarily drawn “lines of equality” permit one to blow up or invent from whole cloth special accomplishments for minorities to increase their racial consciousness. Said lines only get broken when some student dares to report that we are ignoring Edison because he was a “white person.” Does anyone this side of the loony bin have a better explanation?

Significantly, this “racist vandalism” was reported in the same issue of the school paper as another white Christian outrage. This time it was reported by a member of the Jewish social organization Hillel, and it provides a sad story about how Jews are “excluded” on campus. Despite the swelling number of Jews or partial Jews at this college, a number which may soon reach as high as ten, this group has still not been given a separate residence in which its members can live and associate with each other.

The indignant author feels “abandoned by the school when it comes to recruiting diverse students,” although it is not clear that he is requesting anything more than Jews” special right to segregate themselves as all designated minorities are permitted to do. He would also like to open up the Hillel building once the college creates such a facility to Jews of both genders: “[O]ur club is already small, and to permit only one gender to live in a house would be to exclude and alienate the other.” We are also saddled with the problem that Jewish students who come to tour the college take their business elsewhere when they learn there is no “infrastructure of a real Hillel House.” This means that they will not be able to “socialize with their peers.” Jews and others should have every right to hang around with their own kind. But why does the college’s failure to furnish this “right” to fewer than a dozen students at a lavish expense to itself amount to a glaring “lack of understanding”? No such equivalent right is being asked for Japanese students who attend the institution in perhaps larger numbers.