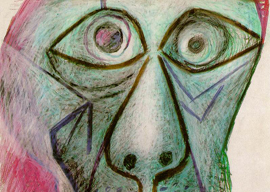 In this Darwinian age, it has become popular for thinkers to try to dream up the evolutionary mechanisms behind vast, fuzzy phenomena such as art. I don”t have a particularly strong opinion on whether natural selection can account for the arts (other than for the one field I know best, golf course architecture).

Still, I am struck by the implausible lengths one literary critic had to go to try and debunk the notion that the arts have evolutionary roots. In a recent review in The New Republic (“Art Over Biology“) of three new books each offering their own evolutionary explanations for the appeal of the aesthetic, Adam Kirsch unloads on the entire genre in what reads almost as self-parody.

Kirsch questions how the arts can be explained in terms of survival of the fittest:

In his early story “Tonio KrÃ¶ger,” Thomas Mann created a parable of one of the central modern beliefs, which is that the artist is unfit for life….Love and marriage and parenthood are barred to Tonio, because he has an artist’s soul….

You may not have been aware that, on average, artists are relatively lacking in sexual opportunities. But just ask artists and they”ll tell you all about the sacrifices they make for their art. “The artist’s decision to produce spiritual offspring rather than physical ones is thus allied to the monk’s celibacy,” asserts Kirsch, who evidently hasn”t met any of the artists (or monks) I have.

“Do artists have more problems than non-artists, or do they just whine about them more intriguingly?”

In his great novel Buddenbrooks, Mann tells the story of a family whose fitness to thrive in modern society declines in tandem with the growth of its interest in ideas and art. Its last representative, Hanno, is a musical prodigy who dies an excruciating death before reaching sexual maturity.

I hadn”t been aware that, say, Jimi Hendrix died a virgin, but I may have been misled.

Kirsch has much else to say about art that I found informative. For example:

As Kant famously taught, the very definition of the aesthetic is that it is disinterested….

This would seem to exclude from the ranks of artists such financially interested”if not downright financially fascinated”individuals as Pablo Picasso and Mick Jagger. Yet Kant can”t be wrong, can he?

Do artists have more problems than non-artists, or do they just whine about them more intriguingly? Everybody has problems, but artists at least have the skills to make theirs interesting. Thus, it’s more edifying to ponder Beethoven grappling heroically with his encroaching deafness than to listen to your Aunt Linda loudly kvetch about how everybody mumbles these days.

In contrast, the simplest theory I can come up with would be that the arts are methods for manipulating other humans” emotions en masse, and therefore they can be directly useful in acquiring mates and resources to provide for children.