Can the Tea Party Deliver? 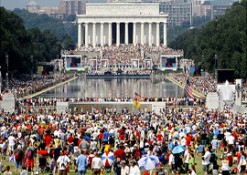 “There are only two men in America who can fill Yankee Stadium on three weeks’ notice,” a friend instructed me years ago.

Indeed, a decade ago, Black Muslim Minister Farrakhan’s “Million Man March” brought a throng of hundreds of thousands to the Capitol.

But, last Saturday, Glenn Beck packed the Mall with a crowd that could have filled Yankee Stadium to overflowing five times over. As it stretched from the Lincoln Memorial to the Washington Monument, the estimates of its size ran to half a million.

This was twice the size of the crowd that heard Martin Luther King Jr. 47 years ago and matched the antiwar demonstrations of 1969.

Wisely, Beck dropped partisanship to convert his gathering into a God, country and Constitution rally, with speakers honoring the courage and sacrifice of America’s military. Said Sarah Palin, a rally star, “Say what you want to say about me, but I raised a combat vet, and you can’t take that away from me.”

Al Sharpton, who organized a counter-rally that turned out a few hundred folks at Dunbar High, was his usual gracious self. Speaking of the half a million Americans on the Mall, the Rev. Al volunteered, “They want to disgrace this day.”

President Obama, seeing that crowd on the Mall as large as the one that came to celebrate his inaugural, must understand what it portends. His moment may have passed.

“We are running a deficit of $1.4 trillion, almost 10 percent of the entire economy. With housing starts and housing sales plunging, jobless claims rising, the stock market sinking and economic growth slowing to a crawl, where are the victorious tea party Republicans going to cut?

For that enthusiastic and energetic assembly is the spear point of an army of millions headed for the polls to throw out the party he leads.

Nevertheless, as Obama raised hopes only to be perceived as having fallen short, so, too, Beck’s believers and the tea party folks are raising hopes and expectations.

But can they succeed?

“We must not fundamentally transform America, as some would want,” said Palin, in one of the direct challenges to Obama. “We must restore America.”

But can we restore America, or is the old America gone forever?

Consider the issue that unites all on the Mall on Saturday—the need for the U.S. government to cut spending, to balance its budget and not to shove an immense burden of debt on our children.

Like last year, we are running a deficit of $1.4 trillion, almost 10 percent of the entire economy. With housing starts and housing sales plunging, jobless claims rising, the stock market sinking and economic growth slowing to a crawl, we will face a new deficit equally large in the fiscal year beginning in October.

Where are the victorious tea party Republicans going to cut?

According to USA Today, 50 million Americans are on Medicaid, and perhaps an equal number on Medicare and Social Security. Which of these three will tea party Republicans cut, when Republicans are already denying Democratic charges that they plan to raise the retirement age for Social Security?

Rep. Paul Ryan, R-Wis., has a 600-page plan to reform Social Security, Medicare, Medicaid and the tax code, the work of a conscientious conservative. But only one in 16 House Republicans has signed on as co-sponsor.

With the racial achievement gap on test scores returning, will the GOP abolish No Child Left Behind or slash federal aid to education?

The big remaining items in the budget are interest on the debt, which must be paid, and war and defense. But Republicans are more likely to be supportive of Obama’s rebuilding a military ravaged by war, and staying the course in Iraq and Afghanistan, than are Democrats.

Obama’s budget commission will surely come in with tax increases on personal incomes, perhaps also for Social Security and Medicare. But the GOP cannot sign on to these and go home again.

Indeed, how can Republicans cooperate with a president who has spent the campaign blaming them for the Great Recession and telling voters the GOP intends to drag us back to the dark past of Bush II?

And why would a “Party of No” that picks up 40 or 50 House seats by its Alamo defiance become a Kumbaya, “Yes-we-can!” party and work in happy harness with Barack Obama?

Can we really “restore America” as she once was?

According to The New York Times, Orange County, Calif.—birthplace of Richard Nixon, Goldwater Country, bastion of the John Birch Society, land of the “little old ladies in tennis shoes”—is today a place where less than half the population is Anglo and almost half speak a language other than English in the home.

Where Ronald Reagan beat Jimmy Carter three to one in Orange County, Obama ran a near dead heat with McCain. And as Orange County goes, so goes California and so goes America.

Republicans and tea partiers are going to have a glorious fall.

But is this one of the last hurrahs?