Can We Still Afford the Slavery Tax? 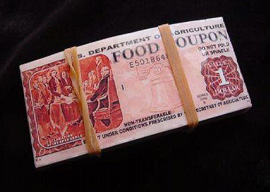 Let’s take it as a given that we’re heading into an age of austerity.

This may not be the case. There is no certainty in human affairs. The secret of tabletop fusion power may be discovered next week; the geneticists may come up with something that abolishes both disease and old age, thereby annihilating both our Social Security and Medicare requirements at one stroke; the solar system may, as in the Poul Anderson novel, pass into a region of galactic space that quintuples all our IQs. All sorts of things might happen. Nobody foresaw the Internet…etc., etc.

Absent any such deus ex machina, however, we are heading into tightwad territory, at least so far as public finances are concerned. Where will the pennies get pinched?

I think most of us have a good outline picture. The age for Social Security eligibility will rise; Medicare deductibles will soar; aircraft carriers will be mothballed; postal deliveries will be twice weekly, then weekly. Under an austerity regime, all these and many other changes will happen.

And then, what about welfare?

“The Slavery Tax was imposed in the robust USA of the 1960s and 1970s, when our country was a mighty engine of prosperity and our governments were swilling in cash.”

Welfare is intended to help poor people support themselves and their families. Some kind of welfare relief has been with us since at least the Poor Law of Elizabethan England. You will get an argument about it all from the sterner kind of libertarian or the occasional strict-Malthusian reactionary, but most of us think public provision at some level is unavoidable.

As soon as you start to look at the numbers, though, you come up against the race issue. Here are the 2007-08 TANF tables—that’s Temporary Assistance for Needy Families, a federal program—broken up by state and race. So for example, in the state of Maryland, which is 30 percent black, 80 percent of TANF-receiving families are black.

It’s the same with food stamps, which nowadays come under SNAP—that’s the Supplemental Nutrition Assistance Program. The New York Times published a neat interactive graphic on SNAP usage a couple of years ago. The accompanying article tells us:

There’s a lot of variation hiding in the overall numbers, as the Times was at pains to remind us. Owsley County, Kentucky’s population is 99.22 percent white: Half are on food stamps. Still, it’s plain that nationwide we’re looking at some big racial gaps.

Those gaps may be getting bigger. The Pew Research Center caused a stir the other day by releasing a report on the white/Hispanic/black wealth gaps. They are more dramatic than is commonly realized, and they’re apparently widening.

Leaving Hispanics out of it—I only have one pair of hands—I’m wondering how these white-black gaps and their consequences will carry forward into an age of austerity.

The gaps seem to be awfully intractable. You need to be over fifty to remember Jim Crow; you need to be somewhat older than that to remember a grandparent who was born in slavery. Yet still the needles on a lot of these dials have barely moved.