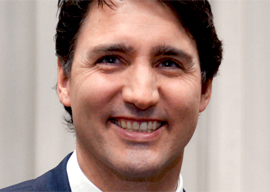 Canadians like to tell themselves that their nation is progressive and tolerant, but they are masters at the art of self-deception.

Even though Canada is larger than the USA in geographic terms, it only holds one-tenth as many people because it’s cold as shit and nobody wants to live there. While Canadians pump themselves full of hot air about how they are culturally and morally superior to Americans, this is but a weak deflection to hide the very obvious fact that they seethe with jealousy and hatred that America is the world’s sole superpower—the center of all the world’s attention—while people across the globe need periodic reminders that Canada exists.

Sidestepping the quite obvious fact that it’s impossible to grow cotton and tobacco inside of igloos, Canada prides itself on the fact that it was the final destination for American slaves headed north on the Underground Railroad.

And, in a sense, they are correct to be constantly upbraiding and reprimanding America for its treatment of blacks, because according to all reports, Canadians treat their black person just fine.

I’m kidding, of course. There are five black people in Canada, and they are known as the “Toronto Raptors.”

Seriously, though, there are just a smidge over a million blacks spread out over that massive sheet of ice. That’s about 700,000 fewer blacks than there are in the Atlanta metro area alone. There are thirty times as many black people in the “racist” USA than there are in Canada, and if our friends in the aptly named Great White North really want to prove how tolerant they are, they are welcome to take a few million of ours.

Still, despite its measly quotient of blacks, Canada is a seething cauldron of racial hatred and deserves to be called out and harshly shamed for it.

Last week, the world was shocked into facing the fact that Canadian culture is basically one giant Klan meeting when evidence emerged that Prime Minister Justin Trudeau was filmed wearing blackface on three different occasions.

The first photo depicts a maniacally grinning Trudeau supposedly dressed as Aladdin. He’s wearing a turban and has his face painted coal-black at an “Arabian Nights-themed gala” in 2001 at a Vancouver private school where Trudeau taught. Trudeau was 29 at the time. It appeared in the school yearbook, so it’s nearly miraculous that it took this long to be publicized.

On Wednesday in Winnipeg, Trudeau—whose mother didn’t wear panties—assumed that annoying “I’ve learned some hard lessons here, folks” facial expression that celebrities and politicians make when they’ve been caught saying “nigger” and apologized—kinda—for what the press was downplaying as an act of “brownface”:

What I did hurt them, hurt people who shouldn’t have to face intolerance and discrimination because of their identity. This is something I deeply, deeply regret….I shouldn’t have done that. I should have known better and I didn’t. I’m really sorry….Yes it was [racist]. I didn’t consider it racist at the time, but now we know better….I’m pissed off at myself, I’m disappointed in myself.

Trudeau—who is well-known for shamelessly appropriating the garb of Jewish people, gay people, and Hindus—also said that he couldn’t estimate how many times he’d worn blackface in the past. This worked in his favor, because two other smoking guns emerged within hours.

The second photo in this hilarious scandal was from his own high-school yearbook in the early 1990s and shows Trudeau in blackface wearing an Afro wig and allegedly singing Harry Belafonte’s “Banana Boat Song (Day-O).”

Before Trudeau could mutter a panicked “feets don’t fail me now,” a third damning bit of visual evidence leaked to the public, and his Liberal Party was forced to admit it was him—a video showing his face and arms covered in black greasepaint while he laughs, flails his arms, and sticks out his tongue. Not to cast aspersions, but he seems high as hell in the video, too.

Trudeau’s blackface transgressions were hardly the first in Canadian history. McGill University has handily catalogued 343 blackface incidents from 1841 to 2016.

Why, then, is anyone surprised? Canada is a racist hellhole of unparalleled horrors.

According to the experts—whom we should trust and never question—the number of hate groups in Canada has more than tripled over the past four years.

In 2017, hate crimes reached an all-time high in this supposedly “tolerant” land. That’s when Muslims were terrified and terrorized and traumatized by a mass shooting in Quebec City that left six strapping young Muslim men dead. (Honestly, I’m not sure if they were strapping or young, but it sounds good for rhetorical purposes. But, yes, six of them were killed just for the “crime” of being Muslim.)

Hate crimes in 2017 ballooned almost fifty percent over the previous year—not that 2016 was a cakewalk for minorities. That’s when the world recoiled in revulsion as an ignorant white Canadian was filmed shouting “white power!” and terrorizing a Canadian Man of Color by calling him a “fuckin shitskin Hindu.” (The reason I’m not mentioning 2018 is that hate crimes took a slight dip in Canada, and declining hate-crime rates make for boring and uninspiring prose.)

Still, these thousands of hate crimes since 2015 were all committed under Justin Trudeau’s watch. Coincidence? Do the math, people. The apple doesn’t fall far from the lynching tree.

Canada is where they committed genocide against indigenous women, banned indigenous cultural ceremonies, and quarantined their own Snow Injuns on their own reservationsforcibly expelled them as if they were lowly Cherokee on their own Trail of Tears, forcing many of them as far south as Louisiana, where the humid temperatures and slow pace of life eventually had everyone slurring the word “Acadians” into “Cajuns.”

Canada had its own chapters of the KKK. Until a mere four years ago, the province of Quebec had 11 different places with the “N word” in their names, including “Nigger Rapids.”

It’s where the humble and prosperous Chinese were banned from voting, from becoming lawyers and doctors, from hiring white waitresses, from sitting in the same sections as white people in movie theaters, and, in 1923, from immigrating to Canada entirely.

Canada is where they do mass shootings of urban entrepreneurs who are innocently filming rap videos. It doesn’t matter if the shooter was black—this is still a hate crime.

Canadians also hate Jews, but you can pretty much say that about the residents of any country. It’s a little-known fact, though, that in 1939, this “tolerant” nation forcibly deported thousands of Jewish refugees who were fleeing the Nazis, who in turn killed an estimated three-quarters of Jews that the rabidly anti-Semitic Canadian government shipped back to Germany.

As far as lynching goes, though, Canucks have been pretty well-behaved. The only lynching in Canadian history was done by an American mob that crossed over the border to lynch an indigenous youth. So in the realm of lynching, congratulations, Canada—you aren’t racist.

But that’s merely one ray of tolerant sunshine amid a snow-blizzard blackout of racial intolerance and outright systematic psychological torture of nonwhites. Say it loud, say it proud, tell it to your mama and scream it to your milkman—CANADA IS A RACIST COUNTRY.

I can’t believe that President Trump hasn’t yet severed all diplomatic ties with this horrifyingly racist country to the north of us. It is time to impose economic sanctions against Canada as punishment for its history of racist behavior. Canada is such a reeking septic tank of racial hatred, they might as well call it Klanada.