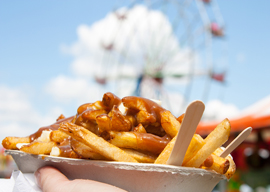 Canada turns 150 this weekend, which is weird because it’s only 37. The left is trying to make this aboot “a celebration of indigenous genocide” because they”re party poopers, but the best way to deal with people like that is to party. I moved there from England in 1975 and left in 1999, but there isn”t a day goes by I don”t long for a beaver tail. Here are ten other things you won”t quite get about Santa’s homeland.

(1) IT’s BRAND-NEW
Canada began in 1980 when it chose “O Canada” as the national anthem and decided to ignore the fact that, technically, the Queen is still the head of state. Even though we declared independence in 1867 (hence the 150 years), we kept the Union Jack on the flag until 1965 when the last British person finally wandered home. America lost about 50,000 people kicking the British out. We just ignored the redcoats until they left on their own accord. That’s how you conduct a revolution”you bore them to death.

One of the advantages of being new is you”re not steeped in centuries of class where people are defined by their accents and aristocrats don”t understand what the working class are saying. Here in Canada we all speak hoser and we”re down for anything new, even metric, eh?

(2) WE”RE POLITE BUT WE FIGHT
Canadians are known for being overly polite. In fact, saying “sorry” is so common, we had to pass the Apology Act so the term couldn”t be used as an admission of guilt in court. However, being polite does not mean you are not willing to get into a flailing fistfight at the drop of a hat. “Goof” may be a go-word in juvie, but goon is something every young Canadian strives to be.

On the smash hit “Out for a Rip,” Rich B discusses the way Americans keep telling us we”re too nice and then he explains, “Yeah we got manners/But fuggin” buddies still fight/And fuggin” swear and fuggin” drink all night.” He then describes pounding the crap out of a buddy who wasn”t sorry after he burned a hole in his jacket with a dart (cigarette). This is the way all civilized Western males should behave. We don”t start fights, but we”re happy to finish them, eh?

(3) WE ARE ALL HOSERS
Rich B is not unusual. There are no nouveaux riches in Canada. There is no class system. It’s just the bureaucratic parasites in Ottawa and the rest of the country hating them for wasting our money. Britain has wine connoisseurs planning elaborate demographic pranks like flooding working-class neighborhoods with Muslims. We have hosers.

“What they call being sociable in Canada is called alcoholism in the States, eh?”

Toronto’s mayor had the exact same accent that the local plumber has and we loved him for it. He beat back the unions and preserved the city’s real estate when it was collapsing everywhere else in the Western world. Of course, to Hollywood liberals he will always be Canada’s crackhead, but what do they know? They give their kids speed. Besides, what kind of pussy hasn”t tried crack at least once?

Hosers are just cold rednecks, and outside of talking like curious leprechauns in a good mood, there are no differences between the far North and the deep South. Checking in on national treasure Puglife will confirm this. Check it out, buddy has a dart in his hand while he’s checking to see if the guy’s dead or just having a dirt nap, eh?

(4) THERE IS NO RACISM
Although there is still a place called “Nigger Rapids,” nobody would ever call a black person that. The name is actually a great example of Canadian naÃ¯vetÃ© when it comes to race. It’s named after a lovely black couple everyone liked. The Underground Railroad ended in Halifax, where the town Africville was built. In the “60s, black celebrities such as Miles Davis and Sammy Davis Jr. would come to Montreal to perform and be dumbfounded by how little their race mattered. It was like that Eddie Murphy sketch where he’s white for a day.

Unfortunately, the plague that is victim culture is seeping north, and Toronto has a Black Lives Matter that constantly complains about Canada’s racist history, which accidentally proves how totally irrational, insatiable, and inconsolable that entire movement is, eh?

(5) CANADIAN FOOD EXISTS
A beaver tail is just a wider, flatter version of Natives” fry bread but with brown sugar on it. When you”re skating on the canal and you need to warm up, nothing beats a hot cocoa with this sugary treat. It reboots your hard drive.

Similarly, poutine is hangover kryptonite. You can be at death’s door, but there’s something about hot gravy, fries, and cheese curds that fills in all the gaps a night of Molson Canadian creates.

Canada is basically Scottish and that means Irish and that means potatoes are heavily revered. You can”t drive more than a mile down the highway (a.k.a. the Queensway) without seeing a chip van making hand-cut fries from scratch. This extends into potato chips, which are adorned in all flavors, including “all dressed” and “ketchup.”

One little-known secret is Canada is also the home of anti-fry nightmare McCain Foods, which has brought frozen fries to America and Britain, and across the Western world. We”re really sorry about that, eh?

(6) THE GOVERNMENT RUNS POP MUSIC
I used to DJ at the college radio station CKCU and we were expected to play 60 percent Canadian content, a.k.a. Cancon. This meant if you were doing a punk/hardcore show, you were forced to play SNFU, No Means No, Death Sentence, and DOA on a loop before earning enough chips to play, say, Discharge.

This makes for a state-sponsored pop chart where meritocracy comes in way after mediocre Canadian acts have hogged the spotlight. Whenever my wife and I visit, I turn on the radio in the car and wait for her to say, “What the hell are we listening to?” I can then explain whether it’s “Strange Animal” by Gowan, “Crying Over You” by Platinum Blonde, or of course the megahit “Rise Up” by the unfathomably gay Parachute Club, eh?