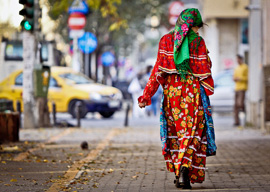 If they do, it”ll probably be on a Friday. According to a friend who now finds himself living in one of Toronto’s rapidly metastasizing Gypsy enclaves, local teachers have given up expecting Roma kids to attend class on Friday because it’s their designated “Stealing Day.”

This invasion wasn”t supposed to happen. Ottawa re-imposed visa requirements in 2009 specifically to keep out Gypsies.

That’s according to a piece penned that year by Rosie DiManno, bleeding-heart conservative emeritus at Canada’s largest newspaper.

DiManno writes that throughout history, Gypsies have been “enslaved and ostracized, subjected to pogroms and genocide simply for being what they were, dark-skinned and perceived as alien, inferior, parasitic.”

Sheesh. Roma are no more “dark-skinned” than DiManno’s fellow Italians, who, while not always warmly embraced by us mangiacake Canadians, never made anybody want to (seriously) gas them in droves. Overwhelming evidence suggests that “parasitic” sounds about right. “Alien,” too, since by definition, a “Gypsy” is a rootless wanderer by choice. As for “inferior,” well, DiManno insists that while “Some [Roma] do, in fact, keep their children out of school,” this “might be because they see no profit in education [and/or] can”t even afford to buy their kids shoes.”

Lawyers call such alibis “admissions against interest.” If the only “free” thing Gypsies don”t want to exploit in their adopted countries is an education, they deserve being called inferior.

British sympathizers have obediently dubbed the Roma “travellers,” which, like most liberal euphemisms, is the precise antonym for whatever it is supposed to be describing. (See “gay” and “diverse.”) In this instance, “travellers” are more accurately described as immovable squatters, such as the ones who moved into a British immigration officer’s (!) house while she was on vacation.

What makes this politically correct terminological nitpickery all the more urgent on the Gypsies” part is the inconvenient fact that, unlike almost every “real” victim group, they aren”t members of a race or a religion. In the words of a decidedly unimpressed Canadian pundit, they are “the medieval prototype of the Occupy Wall Street movement: a shiftless group of hobos that doesn”t believe in property rights for themselves (they”re nomads) or for others (they rob people blind.)”

Or, as I like to think of Gypsies, a sort of Down Syndrome Mafia.

So what is to be done? The good news is that someone finally figured out a way to gyp the Gypsies: The producers of British television’s Big Fat Gypsy Weddings stand accused of conning their “stars” into performing for free.

But as amusing as that is, it clearly isn”t a viable long-term strategy. My solution to the Gypsy problem? Start a rumor that they draw cartoons of Muhammad.