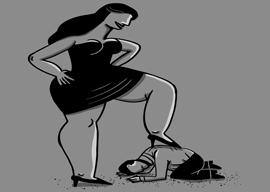 Canada is nice in a totalitarian sort of way, like some lost episode of The Twilight Zone where no one locks their doors and everyone is super polite”or else. “Submitted for your approval”: if you live in Canada, don”t argue on Twitter, or you might find yourself in court looking at 10 years for criminal harassment.

Here’s the CliffsNotes version: Gregory Elliott responded to an advert requesting free labor to make a poster for some feminist do. One Stephanie Guthrie, a feminist activist of some renown north of the border, placed the ad. The pair met for dinner and she thought he was creepy. They didn”t work together, but retained cordial Internet relations, as one does. She blocked him after he disagreed with her assertion that men share collective responsibility for rape.

“It’s a Canadian prison, though, so I”d imagine that it involves fishing trips and sports massage. He”ll be all right. Probably.”

Elliott’s “harassment” consisted of watching what Guthrie was posting on popular feminist hashtags. None of his communication with her is explicitly threatening, though the sheer effort Elliott put into baiting Guthrie strikes one as strange. Far from appearing afraid, Guthrie in fact went out of her way to taunt and bait Elliott.

In almost any other case, Elliott’s claim that he was the one being harassed by a cabal of witches would be ridiculous on its face. However, this isn”t any other case, and groups of feminists ganging up to harass, defame, and attack those who disagree with them isn”t fantasy, it’s standard operating procedure.

Canadian law”I know, right? Canada has its own laws?“defines criminal harassment pretty broadly, but it still doesn”t seem to include seeing what someone is posting on Twitter and arguing with them about it. Prison terms are defined clearly: up to 10 years. It’s a Canadian prison, though, so I”d imagine that it involves fishing trips and sports massage. He”ll be all right. Probably.

The issue, she stated repeatedly at trial, is the number of Tweets she received. Ms. Guthrie can”t pin down any time when she specifically felt threatened. “That’s not how feelings work,” she fem-splained from the stand, further clarifying that feeling “creeped out” constituted a sense of fear.

Elliott definitely seems like a weird dude. You”d have to be to volunteer to do free work for a feminist event, doubly so if you appear to actually be an anti-feminist interested in causing trouble. It’s hard to say exactly what was going through Elliott’s mind, and some of his Tweets do strike one as more than a little odd. It’s easy to see how he might creep a lady out, or even Ms. Guthrie for that matter.

But hey, it’s not like he was showing up at her work or lurking outside of her apartment. There’s not a whiff of Single White Female in this guy. He’s another sad sack hanging out on the Internet, trying to provoke controversy and get attention. Elliott’s not some kind of alpha male warrior fighting the good fight against totalitarianism”on the contrary, he is, by all outward appearances, some incredibly depressing guy who became obsessed with baiting feminists on the Internet.